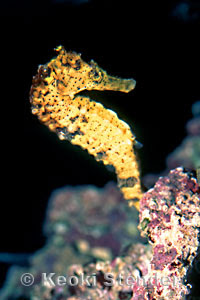 
I would just like to add a bit to the discussion regarding strobes blinding seahorses, because I have done some research on the fish visual system. As some have said, the only potential issue here is TEMPORARILY blinding the animals that might make them more susceptible to predation. Bright light bleaches the photoreceptors (renders the photopigments nonfunctional for a short period of time), and it can take minutes for complete recovery. To my knowledge, there are no data regarding strobe lights making small fishes more susceptible to predation, but it seems plausible and might make an interesting study. I would not expect this to affect seahorses any more than other small fish species.
I also would not expect a profound effect unless you are photographing animals at night or in deep, dimly-lit water. Rod photoreceptors are used for vision in low-light conditions, and they are bleached very easily by bright light, and thus in the dark vision will be impaired more profoundly by a bright flash. Cone cells are used during the day and are less affected by bright light. You can demonstrate this to yourself by sitting in the dark for a few minutes (relying on your rods for vision) and then flashing your eyes with a camera strobe. It will take a bit of time for your eyes to completely recover.

A strobe is not going to cause permanent blindness in a fish- it would likely take long-term exposure to high levels of radiation for damage to occur. And even if damage did occur, the fish retina has the amazing ability to regenerate. New cells are continuously produced in the retina, and therefore it can actually heal if there is damage- UNLIKE the mammalian retina that does not regenerate.

So, for all of these reasons, temporary blindness is very likely to be caused by a strobe, especially in dark water. This might render fishes (not just seahorses) more susceptible to predation for a few minutes or so. If they are not killed by a predator, they will recover quickly and completely. If others would like to report instances of small fishes being consumed by predators immediately after being photographed with a strobe, we can start putting together some evidence that there might be some truth to this "myth". I am interested and would be happy to compile such data. You can send it to me directly at staylor@smu.ky.