Given that I am writing this during the winter season, it seems apt to choose the snowflake moray eel for today's entry. Snowflake morays, Echidna nebulosa, are beautiful animals common on shallow reefs throughout the Indo-Pacific. They attain a full size of around 30 inches, have large nasal rosettes, and a set of relatively non-pointy teeth (more on this later).

The snowflake part of the name is easy to understand, although a little odd for a tropical fish. The name is reminiscent of those white winters my kids have never experienced.  Hawaii  winters are mainly rainy with temperatures all the way down into the 60's, which seems arctic to us. My wife  is currently using two comforters on the bed since it is so "cold" in December.


But I digress, the Hawaiian name attributed to the snowflake moray is puhi kapa with two kahakos over the a's in kapa. John Hoover notes that although the traditional physical description of the snowflake moray fits this particular Hawaiian name, aggressive behavior was also mentioned which does not fit. He suggests that the similarly named but aggressive peppered moray, puhi kapa'a, may have caused some confusion. If you are interested in Hawaii's fishes, you should pick up one of his books to learn more about this and many other great fish stories.

The scientific name is Echidna nebulosa. The "nebulosa" part is from the latin for "cloud." Just think of astronomical nebulae, clouds of gas and dust with stars showing through.
For the genus Echidna, we will pass by the egg laying spiny anteaters (echidnas) of Australia and New Guinea and proceed to Greek mythology. Here we find the wonderful story of the immortal creature Echidna who is half-serpent and half-woman. In one report she is "half a nymph with glancing eyes and fair cheeks, and half again a huge snake, great and awful, with speckled skin, eating raw flesh beneath the secret parts of the holy earth. There she has a cave deep down under a hollow rock far from the deathless gods and mortal men." Born of  sea deities or possibly Gaia and Tartarus, she gives birth to other famous monsters of Greek mythology such as Typhon and the Hydra.

I have no idea if this story was in the mind of the scientist who originally named this group, but who could ask for more for a moray eel? 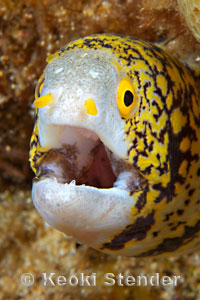 Snowflake morays start out as females and then become males later in life. Sex change in reef fishes is a fairly common and occurs in parrotfishes, wrasses, gobies and others. In parrotfishes the change from from female to male includes a dramatic shift in color. No such change occurs in the snowflake morays, although a paper in the Japanese Journal of Ichthyology documented sharper teeth in the male stage.

In general, most moray eels have extremely sharp teeth, often backwards pointing for capturing and eating live fish. Snowflake morays, on the other hand, have conical or pebble shaped teeth that are much more suitable for eating the crabs, shrimps and such that make up the majority of their diet. The teeth break up the tough exoskeletons of the eels' prey before it is swallowed.  Their skull's compact shape is actually set up to deliver more force to their teeth for crushing than is found in the longer, narrower skulls of their fish eating relatives (Mehta, 2009).

However, snowflake morays are not picky. They will eat fish as well as crustaceans if they can get them. Most reports suggest that they take small fish, but Miller, 1989, showed that they will use knotting as a strategy as well. This is a technique for dealing with prey that are too large, difficult to extract, or are not pointed the correct way for swallowing. The moray simply ties itself into a knot and then draws the prey through the knot. This will realign the prey, extract it, or tear a section out. You would think that a snowflake moray couldn't do much damage with its small teeth, but with its strong jaws, it is capable of tearing chunks out of other snowflake morays (see J. Hoover's book for one account). Perhaps the sharper teeth of the adult males are useful for aggressive encounters with morays of their own species, or reflect their ability to take larger fish and other prey as they grow.

While most reef fish use some form of the incredibly fast suction feeding method, gaping their mouth open and literally vacuuming prey in, moray eels are ram feeders. They strike, grasp, and once they have a hold with the outer jaws, the inner and independent pharyngeal jaws (inner teeth plates) grab hold and work the prey in (see image below). For those that remember the movie Alien, it is hard not to see parallels here.  In snowflake morays, the inner jaws help crush and process the food. Ram feeding, although slightly slower than suction feeding at the start, may be particularly useful in the holes and crevices within which the snowflake moray hunts. The head can move while striking, allowing more variable response and perhaps better realignment and success of  prey capture during the strike process (Mehta and Wainwright, 2006).
Snowflake morays will hunt by day or night. Light does not limit them as their sense of smell is particularly good. Take a look at the prominent tubular nostrils on the face of the moray in Keoki's image below. Fishelson, 2005, showed that snowflake morays have larger nasal rosettes (big areas for smelling) than many of their relatives who rely on vision to hunt. Overall this is an excellent adaptation for hunting in the low visibility of the cracks and crevices of shallow tropical reefs. 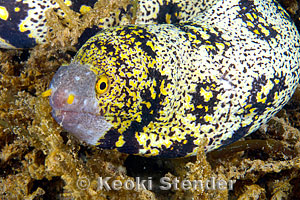 Finally, lets finish with a paper that includes Brian Bowen from  HIMB's ToBo Lab. Some types of fish are found everywhere from Hawaii to Australia to the Red Sea. They are somehow able to get around and have one global population. Others are found in only a few places or even in just one island chain. Hawaii's endemic fishes fall into the latter category. They really don't get around much at all.

One factor that relates to whether a fish is common over a large area or not is the fish's habitat preference. If a fish has a habitat that is "patchy", or not continuously connected, this can lead to barriers to the spread of the species (that particular type of fish). Consider the snowflake moray; they are found in shallow areas with reef,  rock or boulders. Sandy beaches will break up their habitats, deep water between islands will break up their populations, and long ocean distances will be a barrier to the adults as well. Other moray eels that can range from shallow to deep water should have more connectivity and range than the snowflake morays.
However, overcoming some limitations of the mobility of the adult stage may be their reproductive strategy. Most reef fish release planktonic young that drift with the currents. Typical lengths of time to survive drifting are 15-30 days. Those with the shortest drift times are most likely to have more limited distributions (they just don't get around as much). Moray eels have an impressively large planktonic stage called the leptocephalus larvae. Up to several inches in length, they can last as plankton for an impressive 60 - 80 days, theoretically giving them a long reach and high ability to disperse across island chains and ocean widths.

So the next question is, will the long planktonic stage trump the patchy and separated habitat preferences of the adults? Will snowflake moray populations Indo-Pacific wide show just as much genetic connection as morays that are more generalist in their habitat selections? Based on recent work by Reece, Bowen, Smith and Larson, 2011, the answer is yes; the long plantonic stage is a stronger influence than a 5-fold difference in habitat availability for adults.
So next time you see one of these remarkable animals, think of some of the information listed above. These eels are very successful and well adapted hunters of our shallow reefs and shores.

L. Fishelson. 1995. "Comparative morphology and cytology of the olfactory organs in moray eels with remarks on their foraging behavior." The Anatomical Record. Vol 243 (4) pg. 403-412.