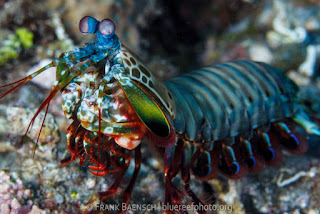 Mantis shrimps, also known as stomatopods, are a highly evolved crustacea that are distantly related to true shrimps.  The have an advanced sensory system and are very intelligent animals, often compared to the octopus.  The visual capabilities of the mantis shrimp are unimaginable. Literally unimaginable! Humans have the ability to see ‘visible light’ comprised of four different colour pigments. The mantis shrimp can see up to sixteen different colour pigments, allowing their vision to go into the ultra-violet and infrared spectrum, colours that are not visible to the human eye.  They also have four built-in colour filters. This allows them to sharpen and fine-tune their vision under many different water conditions.  Mantis shrimp have the ability to move their eyes horizontally, vertically, and independently of each other. This coupled with the fact that each eye has trinocular vision means that the mantis shrimp knows exactly where everything in its environment is located. 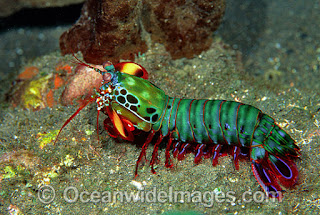 There are two main types of mantis shrimp; the smashers and the spearers. Spearers are the most common form of mantis shrimps.  They are ambush predators, concealing themselves in burrows until their prey swims by. The spearing action is incredibly quick, impaling their prey in less than five milliseconds. On the other hand, smashers do not always require such stealth.  If their target prey is a mollusk or hermit crab, they have been known to push the prey up against a rock systematically smashing the shell until they have access to the animal inside. The power of the punch is astonishing.  Large smashers can have the same power in one punch as a 22-caliber bullet.

Researchers from the Hawaii Institute of Marine Biology have discovered that stomatopod larvae make up a significant proportion of small yellowfin tuna's diet. When the tuna grows over 45cm in length they change their feeding patterns to primarily feed on Oplophorus gracilirostris, a mesopelagic shrimp. Another study that involved HIMB researchers looked at behavioural adaptations of the mantis shrimp to deal with increased vulnerability during molting periods. When the mantis shrimp molts is external skeleton, it looses its hard protective covering and will have a soft body. Having a soft body with no way to protect itself makes the mantis shrimp very vulnerable to predators such as fish.  The study showed that the mantis shrimp would would change its behaviour, becoming far less aggressive and will even cover the entrance to it burrow until it has regrown it external skeleton. Once this has happened, the mantis shrimp will reopen its burrow and return to its normal aggressive behaviour. 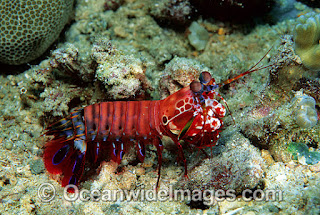 Although mantis shrimp are amazing animals, they are not the best pets.  In an aquarium setting, slashers will attack and slice the other fishes, while the smashers have the power to break the glass of the aquarium.  If you are out swimming or snorkeling and you run into the mantis shrimp, the best idea is to observe them from a distance.  The last thing that you want to get is a sliced up finger or in the worst case scenario, have a finger amputated by a mantis shrimp!


Holland, K., Grubbs, D., Graham, B., Itano, D. and Dargon, L. (2003). THE BIOLOGY OF FAD-ASSOCIATED TUNA: TEMPORAL DYNAMICS OF ASSOCIATION AND FEEDING ECOLOGY. In: 16th Meeting of the Standing Committee on Tuna and Billfish.