On the 26th of June 2015, the Hawaii Board of Land and Natural Resources announced that it would be illegal to harvest any species of sea cucumber from Hawaii State waters for 120 days. This emergency ruling has been implemented to immediately stop the continued depletion of sea cucumber numbers, after an investigation by officers from the DLNR Division of Conservation and Resources Enforcement confirmed that a new commercial fishery had begun (Department of Land and Natural Resources, 2015). 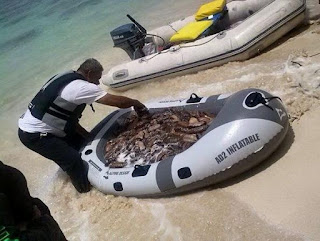 Sea cucumbers along with other echinoderms are described as a “keystone species” as they play a major role in structuring many marine ecosystems (Skillings, Bird and Toonen, 2014). They work as the “vacuum cleaners” of the sea floor consuming organic detritus (waste) and help to prevent the growth of slime algae that can damage coral reefs (Skillings, Bird and Toonen, 2011).  Sea cucumbers like many other species are also the target of artisanal or commercial fishing activities. Stocks of sea cucumbers are being continually depleted, with the more valuable species being depleted first (Skillings et al., 2011). Studies have shown the loss of sea cucumbers from an ecosystem can result in the hardening of sands around reefs, which can lead to the loss of soft bottom species, increased growth of micro and macro algae and reduced nutrient processing (Skillings et al., 2014).

Why is removing them such a problem? Little is known about the growth rate, longevity, or sexual maturity of these animals. The few studies of wild populations of sea cucumbers suggest that these are very long-lived animals with slow growth and reproductive rates.  These are characteristics that make a species very sensitive to overharvest (Skillings et al.,2014).  Studies conducted on species of sea cucumber that are harvested for consumption, primarily Holothuria whitmaei and Holothuria (Microthele) nobilis, suggest that it can take one sea cucumber 10-35 years to reach sexual maturity (Shiell and Uthicke, 2005). Sea cucumbers show no visible sings of ageing and theoretically in perfect conditions they could live forever. However in a wild population the likelihood of this happening is very rare. It is estimated that that the average life span of a sea cucumber is approximately 40-60 years (Shiell and Uthicke, 2005).

Why has the harvesting of sea cucumber become such a problem? Sea cucumbers have been harvested for consumption for over 1000 years in China and India (James and James, 1994).  These traditional practices only harvested a small amount of sea cucumber for consumption. This was not a problem because they were not depleting the stocks to a point that they could not recover (Friedman et.al, 2010). The commercialization of the sea cucumber, primarily as ‘beche-de-mer’ the dried form, in the Asia-Pacific region saw a spike in the amount of sea cucumbers being harvested. As this industry was unregulated, sea cucumbers were being harvested in huge number in the early 1800's but the trade declined by the early 20th century as the populations were reduced to a point that there were insufficient numbers to support a trade or to replenish the stock numbers (Ward, 1972; Moore, 2003).

Over a hundred years later, in the 1980's, another boom in the harvesting of sea cucumbers occurred, as there was a spike in the demand from the Chinese communities around the world (Friedman et.al, 2010).  Today, the demand from the Chinese communities around the world is still increasing. Even with the introduction of an aquaculture industry, the demand for sea cucumber greatly outweighs the supply. One kilogram of sea cucumber has been recorded selling for US $2,950. This has caused sea cucumbers to be harvested from wild populations in numbers that have not been seen before (Friedman et.al, 2010).  If this trend is to continue, irreversible damage will be done to the sea cucumber populations resulting in the extinction of many species (Purcell et.al, 2010).