I know people don't believe me when I tell them that the flower-like plumes in our water table are actually worms. You can see it in their eyes. Then they reach in, the plume disappears in a instantaneous flash, and .... they still don't think of it as a worm. Not that I can blame them, it is pretty hard to reconcile such movement with a worm. Most folks only think of worms in terms of earthworms, or maybe fireworms.
So lets take a closer look at these animals. For training, I have the volunteers look at a preserved specimen. This may help some, because you can see the segmented worm-like body clearly. If you look more closely, you can even see the tiny bristles down the body that anchor the worm in the tube. Ever pull an earthworm out of the ground and only get half? Did you wonder what they were holding on with down in there? It is not like they have little hands to grip, but - they do have the same sort of bristles or setae to help them anchor. Fireworms take these bristles further to become a defense mechanism.

So featherdusters are worms. The plume-like structure is a crown of tentacles used for feeding and respiration. If you look closely, you will see that the crown is made of feathery radioles with smaller pinnules branching out to each side. Hairs on the pinnules create a current that flows the water from the outside in.  Particles drop off on the inside of the crown and are passed along feeding channels that run down the length of radioles to the mouth. The particles are sorted as they go, ejecting the large ones and saving the medium-sized particles to use in the creation of the tube. Those that are just right go into the gut; sort of a Goldilocks and the Three Food Bits story. 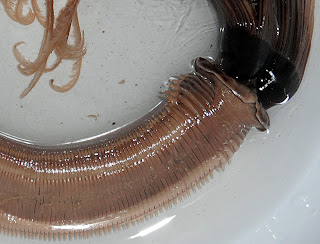 Tube creation is pretty entertaining - the worms have a collar on their body at the opening of the tube. They store the building materials (sand or mud grains) in a couple of sacs on each side the collar. When they are ready to create more tube, they mix a slurry of mucous with the grains and then rotate in their tube so that "the collar acts like a pair of hands, molding and attaching the mucus-sand string to the rim of the tube" (Ruppert, 2004). So worm, crown and tube, a winning combination.

You can see the full retraction action in the video below. The contracted worm's body is probably only a couple of inches long, not much longer than the length of the crown when folded together. The tube continues down into the substrate and is long enough for the entire worm and its tentacles to retract into. The time varies between individual worms for pulling in and coming back out of the tube; but it usually takes less that a couple of minutes.


Why all this bother to create a tube to pull down into and a crown of tentacles to feed with? Well think about the evolutionary pressures here. Worms..... and fish.....lots of fish.... hmmm. Fireworms have cactus like bristles for protection. Featherduster worms have a crown of tentacles and a camouflaged tube. If the tentacles get bit, no big deal, the main guts and important parts are down below and they can always regrow the crown.

According to "A Guidebook of Introduced Marine Species in Hawaii" (edited by Eldredge and Smith, 2001), featherduster worms are an introduced species here, appearing around the mid 1960's. They are native to both the Red Sea and Indo-Pacific. They most likely got to Hawai'i by attaching to the hulls of ships; thankfully, their ecological impact is probably minimal. That is, unless they are harvested for the home aquarium trade. For a while, collectors were pulling featherduster's out of Kane'ohe Bay in great numbers (C. Tamaru pers. comm.). The concern was not that folks were removing an introduced species in unsustainable numbers, but that in pulling them out of the reef, living corals with which they often intertwine, would be damaged.

So University of Hawaii researchers figured out their life cycle and how to grow them in captivity (Bybee, Tamuru et.al.). A great aquaculture end to a probable problem. Unfortunately, about the time that Tamuru, Bybee and gang figured out how to grow them via aquaculture methods, the aquarium trade found cheaper sources in other parts of the Pacific. So the aquaculture knowledge, although available, is not yet scaled up in any major fashion. Let me know if you hear different.

In the meantime, enjoy these beautiful animals - that are actually really truly - worms.