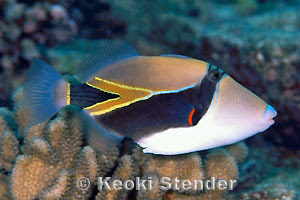 If you enjoy snorkeling around Hawaii's reefs, you have probably encountered the state fish of Hawaii, the humuhumu nukunuku ā pua‘a also known as the wedgetail triggerfish (formerly known as the reef or Picasso triggerfish) or Rhinecanthus rectangulus .  The name is sometimes said to be longer than the actual fish!  The Hawaiian word "humuhumu" means "to stitch together", perhaps relating to their geometric color patterns (1), while "nuku" means nose and "pua‘a" means pig, referring to their trademark pig-like snout.  Thanks to the larger than average distance between their eyes and mouth, they are fit to feed on spiny invertebrates such as sea urchins without being hurt.  The grunting sounds they create while feeding (2) or threatened resemble pigs as they they blow jets of water out of their mouths into sand to locate tiny invertebrates such as shrimps and crabs.


Their most distinguished feature is a double spine, or "trigger", which they can extend to lock themselves into crevices keeping them safe from predators.  Known for his studies on reef fish ecology, Dr. E.S. Hobson found that their main survival technique relies on not just their trigger, but on other reef fishes as well.  When large schools of fishes enter the area, the reef triggerfish will discretely crawl out of its crevice and not be noticed by other predators (shark, eels, etc.)  This is a common behavior among reef fishes that find shelter in small spaces, such as slits and cracks in the reefs.

A professor at the Univeristy of Toronto, Rick Winterbottom, performed studies in 1974 which showed only two muscles in their fin rays.  Whereas, Dr. Laurie Sorenson, a researcher under Louisiana State University discovered that reef triggerfish have developed 2 more muscles in their fins in the last 40 years alone.  Her main focus was on their movement abilities and anatomy, coming across this discovery while working with the Hawaii Pacific University.  The efficient MPF swimming and fast development of fin muscles demonstrate a quick evolutionary scale for a single species.

Triggerfish become very communicative when threatened.  Bethany Coffey, a Ph.D. student in the Tricas lab is currently researching this type of behavior.  Upon speaking with her, she explained that  reef triggerfish are known to produce different types of sounds which can be a pectoral fin drumming noise or a clicking sound made with their jaws. Coffey is attempting to better understand the function of the different sounds these fish make.  To do this, she is comparing the vocal behaviors used in aggressive interactions like those with an undulated moray eel. It is possible that the different vocalization types convey different information depending on what the fish is interacting with, but the data has yet to be analyzed.

Coffey's work reflects a study done back in 1968 where researchers found that the pectoral fin drumming sounds were correlated with stressful interactions.  These sounds imparticular were created when the reef triggerfish was being held underwater or in the air, while confronting an intruder, or when being chased.  This may mean that humuhumus produce sounds to startle predators and the drumming action is another survival mechanism to compensate for them being a relatively slow-moving species.

There's a lot more to the Humuhumu nukunuku ā pua‘a than just being Hawaii's state fish!  Hopefully, in the near future we will read about Coffey's results and gain a deeper understanding on their means of communication.

E.S Hobson (1972) Activity of Hawaiian Reef fishes during the evening and morning transitions between daylight and darkness.