Killer Clams - or Not 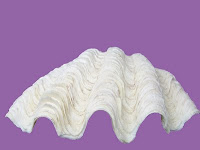 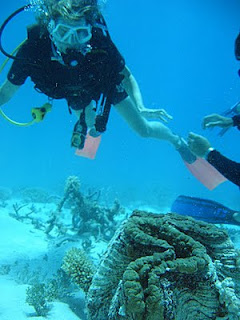 Many people have asked about the giant clam shell down by the touch table. It is indeed one of the valves of the largest type of giant clam, Tridaca gigas (valves being the term for the each side of a clam shell).

Just to give some perspective here, there are several types of "giant clams" or tridacnids, but most are smaller than T. gigas. All however are spectacular in their own way. First off, these clams do not bury out of sight in the mud and extend just a siphon to the surface to filter water. Instead, they sit right up top, often embedded in the reef, with shell open and skin expanded out to catch the maximum amount of sunlight. In a word, these clams are farmers. They are raising beds of micro-algae inside their skin.

Although this may sound odd, consider the great partnership here. Out in the open, plants in the ocean are under constant pressure from predators trying to eat them (that would be all of the grazing fish, snails and so on). By living in a giant clam, these algae have a safe haven. If a fish comes by and nibbles, the clam closes up. I am trying to imagine a sheep grazing analogy here, and in my mind I can picture a field of giant clams in a grassy meadow snapping shut as sheep try to reach in and eat, but it is a bit of a stretch...

At any rate, in return for the safe haven the micro-algae give off sugars and carbohydrates for the clam. The clam still filters food from the water as well, but it does not have to work very hard and any waste products it produces are probably of use to the micro-algae as fertilizer. An excellent system and for those of you who know your coral biology it will not come as a surprise to learn that the micro-algae are zooxanthellae - the same type of micro-algae found in our reef building corals! 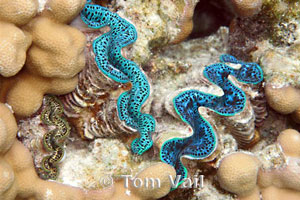 Most people notice these clams by their incredibly bright colors. Deep blues, golds, yellows, they are a thing to behold and a very popular in the home aquarium trade. A beautiful living blue tridacnid clam can sell for upwards of $200. Dead ones have value too, a three foot shell might go for $1000 - $2000 dollars.

I should also mention that they are highly esteemed as food in many parts of the Pacific and Asia. Although most types of tridacnid clams are now listed as "Vulnerable or Threatened" and are trade protected by the IUCN (International Union for the Conservation of Nature), there is still much illegal poaching. Thankfully tridacnids can be raised in captivity or even farmed. I can recall a very nice scuba dive I did with a friend years ago at the "clam farm" in Palau.  While viewing the clams, we attracted a free swimming remora, which attached to my leg and spent most of the dive busily trying to find and clean parasites from my dive booties - unsuccessfully I think but that is another story. Hopefully clam aquaculture, protection and education of consumers will take some of the stress off of the native populations.

To see living tridacnids, stop by the Waikiki Aquarium. They have an excellent selection of both the small colorful clams and the largest and oldest giant clam on exhibit in the United States. It came from the Palau clam farm in 1982 and was already 5 years old. That makes it 33 years old and still young for its type (they can live for over 100 years).

As to "Killer Clams," well despite the mythology and the old movies, you would have to work at it to get stuck in a big giant clam. They have so much tissue spread out to the sun that it takes them awhile to pull it all back in. They don't shut in one big snap, but close with a series of jerks and pulses - shooting water out each time. Typically the jet of water from the first reaction is enough to deter any fish or other intruder. 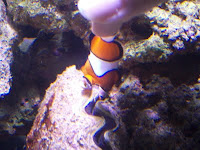 Although there are those determined animals (and ones not too bright) that may have an issue, such as this unfortunate clownfish in a home aquarium. So  do not put your head in one and wait too long. Other than that, enjoy the beauty of these magnificent creatures. I am not sure where the giant clam shell outside our touch table came from - maybe from back in the days when HIMB had a lab presence out at Enewetok. If anyone knows, drop us a line.