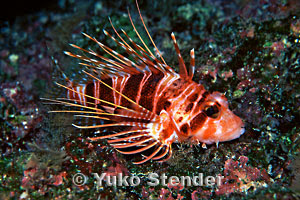 Well next week is Thanksgiving, and I know it is going to come fast so. . .  time to haul out the usual Thanksgiving reference, the Hawaiian turkeyfish, Pterios sphex (I could have gone with the pigfish - but I am hoping to show some restraint this holiday).

The image above is a Hawaiian turkeyfish, one of our island endemics (found only in Hawaii). They are beautiful animals, to about 8 inches in length, defended with poisonous spines and, although easy to spot once you see one, they are remarkably well camouflaged in nature. They often hang out upside-down under ledges and in caves (interesting to think about this, orientation is just not that important underwater).

The Hawaiian name, nohu pinao, means dragonfly. I can easily see how this would apply. They sometimes use their fins to herd small prey as they glide over the reef.

They are also called "lionfish." Perhaps the ornate fins look like a lion's mane to some? Or maybe they just seem fierce, lowering their frilly (and venomous) spines towards an aggressor.  They are part of the scorpionfish family, all of whom have venomous spines which hurt like crazy if you get stung. The sting is best dealt with by treating it with very hot water. 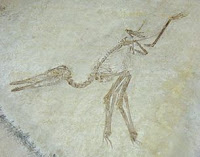 The scientific name Pterois sphex breaks down into two parts. The first part is the genus Pterois. There are many different turkeyfishes in this group around the world. As to meaning, Pterois is a bit like "ptero" in pterodactyl, a type of pterosaur (winged lizard). For the turkeyfish, think "wing". The second term, sphex, is the species. This relates only to our local turkeyfish. It translates as "wasp," very apt.

Names aside, these are wonderful fish to see if you can find one.  Spend enough time looking around out on the reef and you will.

One final set of thoughts in honor of Thanksgiving.  Turkeyfish are classic ambush predators. They look so unlike a fish that they can either drift up on their prey unnoticed or sometimes the prey (such as a small shrimp) might walk right up to them. In either case, once the shrimp gets just a bit too close, the turkeyfish snaps open its huge mouth creating a vacuum that literally sucks the little shrimp in. 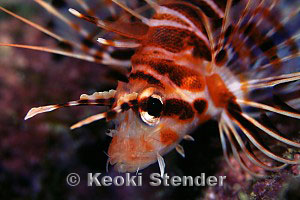 Try this at your thanksgiving dinner.

While you are taking this approach, remember to be discrete, keep your knife up and just don't let anyone's criticisms bother you. A study of predatory fishes found that those that were both well camouflaged and well protected by having poisonous spines or other features, also tended to have the smallest brains for their body size (1). So be like the Turkeyfish, eat well, don't let others worry you and have a great Thanksgiving!