Tuns of fun? New Snail in the Education Pool. 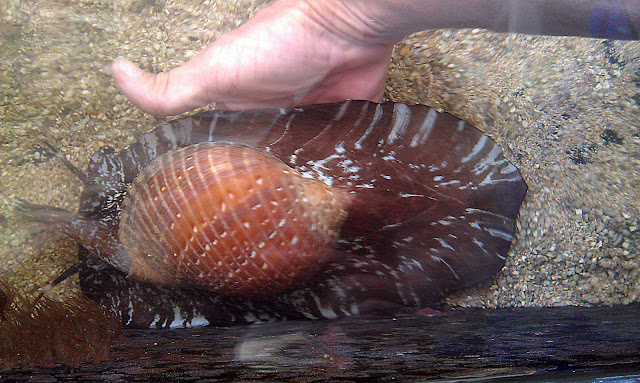 The shark group recently dropped off  a very large snail for the touch table. It will probably be a relatively short term addition - I may have to move it to a nearby water table.

It is a partridge tun snail, Tonna perdix or pu'oni'oni'o. These are rather amazing creatures. They are animals of the sand, burying during the day and emerging at night to hunt. They extend a huge foot, much longer and wider than their shell and literally glide over the sand in an effortless fashion (leaving rather a lot of mucous behind - one reason this animal is destined to be a short timer in our tank).

Typically they hunt at night for sea cucumbers and swallow them whole! It is an amazing process in which they suddenly extend a huge tubular mouth and just siphon the cucumber down in a matter of seconds.

I was a bit concerned when I noticed the snail in the tank. But then I thought, no big deal, we have lots of sea cucumbers. I wonder which one it will eat? 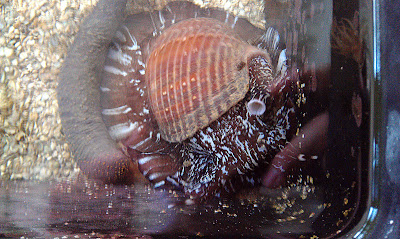 In the second image, the snails probosis and mouth is the large opening pointing up as it quests for the cucumber to suck down. The other opening is the siphon that it uses to breath and smell. 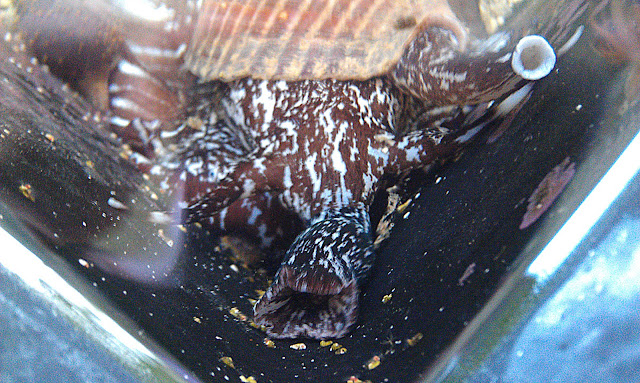 I felt like one of those natural history film documentary folks. Blake was taking pictures and I was doing the part you don't see off camera before some lucky predator wins and some unlucky other animal does not. In this case the sea cucumber lived to clean sediment for another day. Soon some other sea cucumber will not be so lucky, but the tun snail will. Hopefully we will get some of this on video.

This is a NO TOUCH animal for the groups. We do not know how well they do in captivity.

Thanks to Blake from Greta's lab for the images!