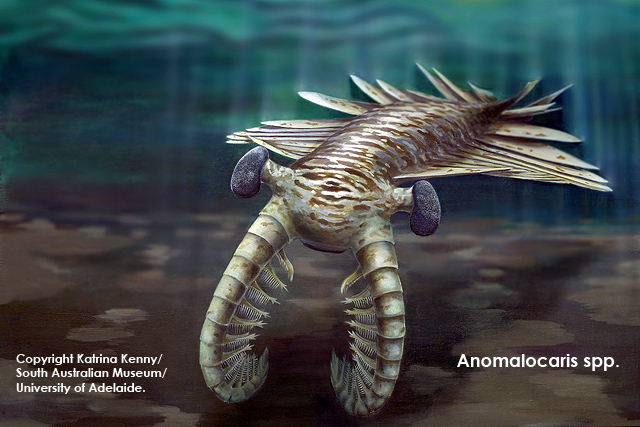 We are living in dull times. Back in the old days (say 500 million years ago), shrimp were something to worry about. We are talking a mouth ringed with teeth, grasping arms lined with spikes, and two pretty sophisticated eyes with over 1600 facets (the better to find you and eat you).

Gotta like that - of course today's shrimp are only non-scary because they are so small. I recall once watching a set of  shrimp attack and eat a much larger crab that was having some issues. They simply swarmed it and began picking it apart at the seams. Rather disturbing to watch, but they were just getting in fast- the crab was going down and something was going to eat it. Why not the little guys?

The 3 foot long "shrimp" mentioned recently in the news with incredible faceted eyes is actually not so much a "shrimp," as a shrimp-like arthropod, an Anomalocaris. Arthropods are the incredibly diverse group including shrimps, crabs and even insects. I remember my brother telling me once that the lobster I was eating was, "just a big cockroach" and to some extent he was correct. It was part of the arthropod line just as insects are. But much tastier.

At any rate, check out the attached links for cool articles on this impressive arthropod, the Anomalocaris (pictured at top) and evidence of development of compound eyes. 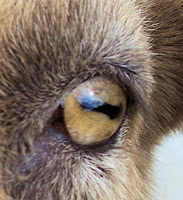 People sometimes say that looking at a goat's eyes gives one the heebie jeebies because they seem so fathomless and ancient. 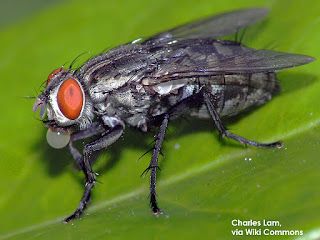 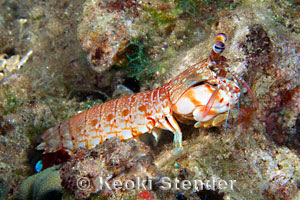 See: The University of Adelaide (for the most accurate article) on the Anomalocaris
or The Christian Science Monitor (for a bit more drama)
Posted by HIMB CEP at 1:58 PM