How are a Cactus and a Sea Anemone Alike? 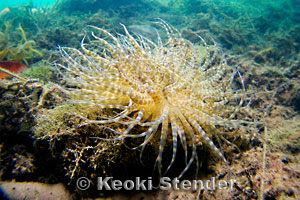 Although fairly common in Kane'ohe Bay,  Boloceroides, the "swimming anemone" is a curious creature that most folks in Hawaii rarely see. Look for these in the holding pens off the floating bridge by the touch table. They are really quite beautiful. They have such a profusion of striped tentacles that they barely resemble a sea anemone,  they also have some unique traits.

First off, they can swim. Definitely an unusual trait for a sea anemone and one that might not seem all that useful, given that they do not swim very fast. We are not talking darting around the reef here, more of an pulsing jelly like swim that allows them to sidle off from any unpleasant situation. Useful at parties, social gatherings, an encounter with a sea slug that might dine on them, or if handled roughly by any other creature such as a small human poking around in on the reef, or a education staff member trying to remove them from the touch table.

In fact if handled roughly a second line of defense comes to the fore that harkens back to the title of this entry, "how are a cactus and a sea anemone alike?" Upon contact, Boloceroides'  harpoon like stinging cells (nematocysts common to stinging jellys, corals and sea anemones) begin to coat the intruder's skin with hair fine barbs.

And though you may not feel their entry or sting, what is more disturbing is that, like a cactus, you will end up with a visible reminder of the encounter. Because when touched, Boloceroides not only starts to sting, but starts to detach a large quantity of it's tentacles as well - which then adhere to your fingers and continue to sting. Just in case you did not get the message.