You may recognize these critters from the No-Touch Table.  These anemone-looking animals are called zoanthids, stemming from the order zoanthinaria.  Belonging to the phylum cnideria, zoanthids are loosely related to corals and jellies.  In fact, zoanthids are soft corals. 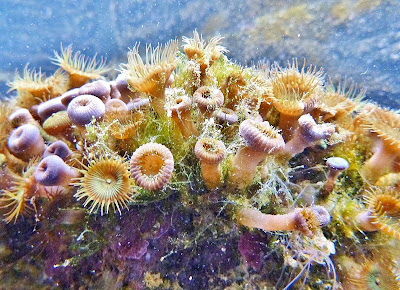 When most people think about coral, one of the first things that comes to mind is a colorful, tropical coral reef.  The grand majority of a reef is composed of coral skeleton.  Unlike the stony or hard corals, zoanthids are soft corals which lack an internal limestone skeleton.  Instead of having a rigid internal skeletal structure, their bodies are tough and leathery. 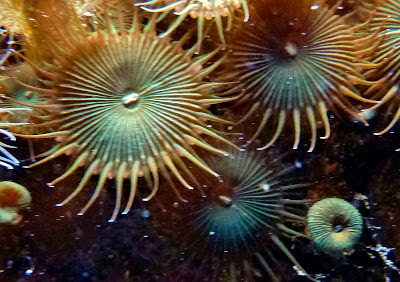 Being cnidarians, zoanthids fall under the same phylum as corals and jellies.  One characteristic that all cnidarians share is the ability to catch prey using stinging cells called nematocysts.  The sting of some nematocysts can be excruciatingly painful.  The sting of a zoanthid, however, is benign to humans.  To compensate for their stinging short-comings, certain species of zoanthid can secrete toxins as a deterant.
One species of zoanthid, Palythoa toxica, produces polytoxin, one of the deadliest toxins known to man.  Ancient Hawaiian warriors of Maui would tip their spears with polytoxin to ensure the wounds they inflicted would be deadly. 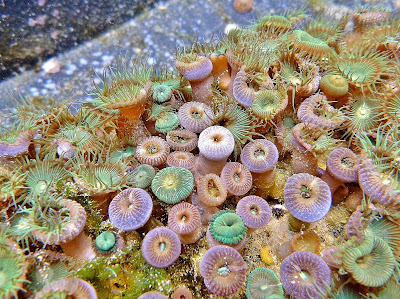 Not all zoanthid species are toxic.  It was thought that the species being sold for home aquariums where all of the non toxic variety.  In a publication from 2011, researchers tested zoanthids being sold from home aquarium stores within the United States.  Zoanthids containing the deadly polytoxin were found in three aquarium stores in the Washington DC area.
These incidents of toxic animals in a retail setting may be due to mistaken identity.  Zoanthid species can be extremely difficult to distinguish from one another.  Even deciphering between the genera of Palythoa and Protopalythoa can be nearly impossible without DNA analysis.  This is why our green zoanthids are residing in the No-Touch Table. 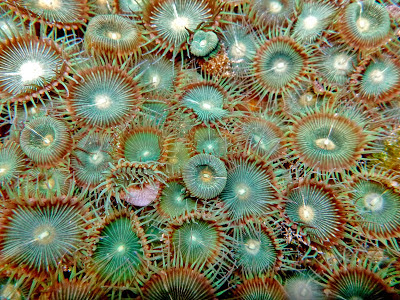 They are green.  They are zoanthids.  We think they are Protopalythoa, but we aren't taking any chances.
For more information about the toxic zoanthids found in home aquarium stores, follow the link below.