Getting all Puffed Up 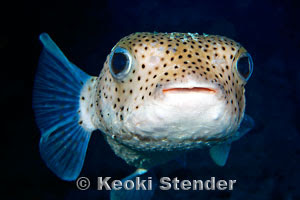 Our porcupine fishes are always a great hit with visitors at the shark lagoon. In today's blog we will visit three areas of interest in relation to these charismatic animals.

1. "Its so cute!" There is a lesson here - actually several. First off, they are cute because they have large eyes, lips and fins relative to their pudgy little bodies. These are human baby-like features that we relate too instinctively. It is why, when our children wake us up in the middle of the night for the fifth or sixth time, we do not shorten their life span in any fashion. There is an evolutionary imperative here to not take out our own young.

You can point this out to the visitors and ask them what the actual uses of these features are.
What does having large eyes tell us about the fish? Would you expect them to be day or night hunters? (large eyes = low light)
What about those lips and mouth - did  you know that they have two vise-like crunching plates just inside those sensitive lips? These fish crunch up crabs, snails, and oysters like they are popcorn. Watch your fingers! Check out the jaw image here: http://australianmuseum.net.au/image/Porcupinefish-upper-jaw.
Watch how they move - like helicopters on the reef. The wide fins are invaluable for maneuvering around the reef to pluck off the crabs and  such. 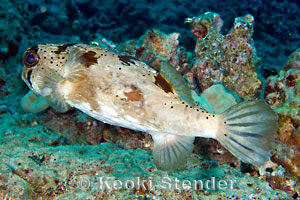 2. "Why doesn't it puff up?" Pufferfishes have a very impressive set of defenses. Let's consider the order here. Imagine that you were a pufferfish. The best defense is to not be noticed in the first place. Take a look at the camo pattern on this fish. If you were a pufferfish, if you were sitting still, you would be very hard to see. Next, if something did try to eat you, it would be best if you were hard to choke down, hence the usefulness of the puffing up bit. Of course there would be no reason to do this unless you were worried about being eaten. So you would stay deflated most of the time.

How do puffers inflate? They take a mouthful of water and swallow. A flap closes off the front of the mouth, so the water is forced down the throat to the stomach, which has a special pleated section on the belly side that can expand. It may take 14 to  20 quick gulps to fully bloat out.

Spiny puffers or porcupine fish have an additional defense in that they have spikey scales that are attached only at  their base points with one long point free and lying flat on the skin. As the skin stretches, the long unattached point up these special scales is forced to rise up and stick out as a spine! For a great x-ray photo go here (x-ray-vision-fish-inside-out)and scroll through the photos to the  porcupine fish.

3. "Isn't it poisonous?" Being poisonous is great, but as far as defenses go for an individual, it is of limited value (great to know that you took down whatever killed you, but a bit late). So, pufferfishes tend to be poisonous if eaten, but this is a third level defense with a pay off for the entire species rather than the individual. 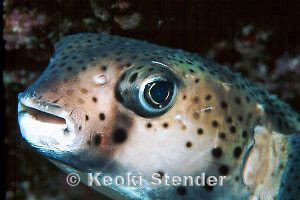 These are impressive fishes! I actually have three different species shown on this page. Do you know which is in our shark lagoon? Check out Keoki and Yuko's section on  porcupine fishes or your fish books at home, then let me know which type you think we might have.