Amphipods Are - Not really a type of Running Gear

At the touch table, folks sometimes notice tiny little critters crawling about on the sides and bottom. Less than 1/4 inch long, it is hard to focus on these little animals. Even if you could see them clearly most people would still be a bit confused, they look most like little fleas. But they are in the salt water. Running around.  And sometimes swimming.

So they are obviously not fleas. Not even close really - they are much closer to the shrimps. But they do have a flea-like body shape with flattened sides, humped up back, and some that live on beaches can even jump.

Let me introduce you to a very very important group of marine crustaceans -  The AMPHIPODS. 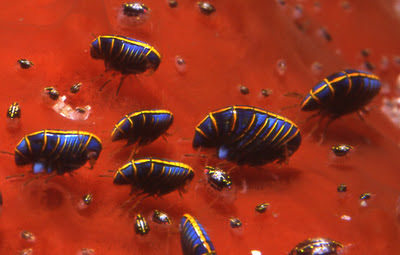 One Antarctic Researcher noted in her blog, "Amphipods rule!" At least they rule many bottom habitats - especially if there is algae or other food to scavenge. The Antarctic researcher found 300,000 of them per square meter (a chunk of bottom about 3 foot by 3 foot). Check out her pictures of some of the more beautiful ones they found in yellow, red and green (nice eyes on this one). Image above from seascapeza, a photographer in Cape Town S. Africa., amphipods on a red sponge - pretty cool.

The other day we had an amphipod die off in the touch tank and pipes. Somehow we had supersaturated water (too much air) in the lines and most of the amphipods got bubbles inside, then floated to the top. Sal noted it first and I didn't count, but it was like an amphipod slick on the surface. Hundreds of them would be a conservative count - over a thousand might be a better shot.

Amphipods on California beaches live in the seaweed that rolls up with the surf on the shore. They use the angle of the sun along with an east-west "map" of the beach they have internalized to get to the optimal tide zone on the beach. All this without being able to think.

A professor of mine studied amphipods in Alaska that would eat seaweed (not all that nutritious really). Since they do not have multiple stomachs or chew their cud -  they would simply eat the food once, get some value, then go back and eat their pellets later (after bacteria had released more food value). Rabbits do this too.

Hmm, well maybe that is not all that amazing, but I am sure there are more amazing things about them. They are just not studied all that well yet.

For a nice biology wrap up, check out this site at the Museum Victoria in Australia: Amphipod Biology.

And admire the ones running around on the tank walls.

Oh, and the running gear comment relates to what you get if you Google "amphipod." Obviously a runner/ entrepreneur  was impressed by these critters too. Named a whole gear line after them.
Posted by HIMB CEP at 5:37 PM