It is the Darth Vader of seastars. Up to 3 feet across, the crown-of-thorns seastar (Acanthaster planci) is covered with incredibly sharp spines dripping with toxic mucous. Crawling across the reef, it climbs up on defenseless corals, young or old, spreads out it's stomach and begins to voraciously feed. The coral, unable to move, sits there as it's skin is slowly eaten away. When you are a coral, no one can hear your cry. An outbreak of crown-of-thorns can destroy 90% of the living coral in a reef in less than a year. Divers attempting to deal with an outbreak end up with puncture wounds from the 2 inch long spines that easily pierce their dive gloves. Pain from the puncture wounds starts as a strong burning sensation, with bleeding, and then progresses to a swollen dull ache that lasts for hours. The seastar crawls on. 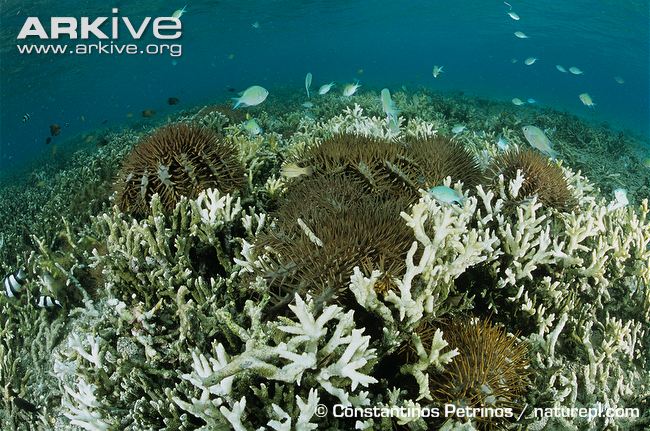 Sounds pretty bad right?  How about: 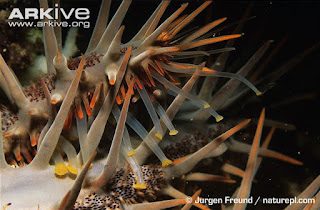 It is the most incredible of seastars. These beautiful animals range in color from delicate tan and browns to green, highlighted with blue, red or even iridescent purple. Like some of the most colorful butterflyfishes, parrotfishes and others, the crown-of-thorns is one of the suite of coral predators on tropical reefs that play an important role in the reef ecosystem, supporting a diverse reef assemblage by feeding on select corals. Being a seastar, it cannot outrun or quickly crawl away from predatory fish, so it comes out to feed mainly at night and is also protected by a set of impressive spines that secrete a venomous toxin to remind a predatory fish that here is a meal that is simply not worth taking. Unlike other less agile seastars, the crown of thorns can climb right up onto delicate branching corals, spanning branches like a trapeeze artist as its stomach comes out to gently feed. Given a choice, the crown-of-thorns feeds selectively, in Hawaii on many of the shorter lived corals. Evidence of outbreaks go back thousands of years. Modern outbreaks are most likely related to irresponsible humans (that would be us), unable to contain our own waste products which spill out onto the reef, increasing the nutrient load and leading to outbreaks. Humans also remove natural predators, the beautiful large shelled triton's trumpets, which might otherwise keep them in check. 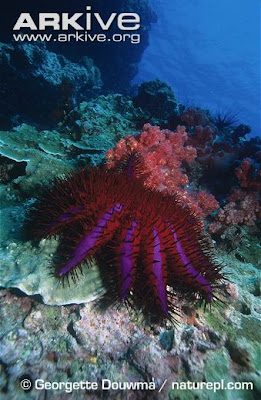 Well - what do you think? Either, neither, both - or just sensationally bad writing on my part?

The reality is a bit of each. In small numbers, crown-of-thorns seastars are a normal part of a reef ecosystem. Historically, outbreaks were probably few and far between. The issue is that with all of the other current stresses on coral reefs, as outbreaks have become more frequent, this leaves scant time for reefs to recover.

Which brings up one of the big questions - where do these seastars come from to start an outbreak?  Since an adult crown-of-thorns seastar can release up to 60 million eggs in a single spawning season, one good season of egg survival could have some serious consequences.  This seems to be true for all types of reef life that release thousands of floating eggs at a time. From seastars to fish, one unusually prolific season for the drifting eggs can produce a sudden rise in a local population - at least in the short run.

And in theory, once a site is coated with seastars, anything down current would get an even bigger whammy. On the Great Barrier Reef for instance, outbreaks of crown-of-thorns seem to start in the north and move down current and south.  It  makes sense that the spawn of the first rising population seed everything downstream, but new research indicates that this may not always be the case.

Molly Timmers, Chris Bird, Derek Skillings, Peter Smouse and Rob Toonen (researchers from HIMB, JIMAR, SOEST and Rutgers) working in the central Pacific, have a paper out in which they show that crown-of-thorn populations from Tahiti, Guam and the Hawaiian island chains and more tend to be very localized and genetically unique (separate). So outbreaks in these areas are from each locality's stock, not drifting in from nearby upstream areas. Just another piece of the puzzle as folks try to decide what causes and outbreak. For a nice synopsis of the paper, check out "Coral-eating sea star invaders turn out to be locals" by Carlie Weiner, or

What to do if you see a single (1) crown of thorns seastar on the reef? I suggest you see what it is doing or has done (the white coral skeletons it leaves in it's wake are diagnostic), note the type of coral it eats, admire it's color, and don't touch it.

How about 5 crown of thorns in a small area? Get hold of the Eyes of the Reef Network. They can respond to an outbreak.

How do you prevent an outbreak? Well keeping our bays and reefs healthy by reducing nutrient loads from land is always good, and living lightly on the planet to slow global climate change wouldn't hurt. 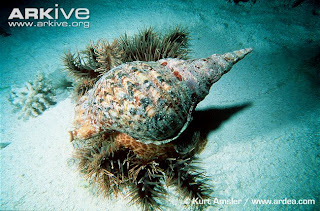 Finally, learn more! I haven't even mentioned the role that coral guard crabs play, or talked about haliquin shimp that snip off seastar pieces, or fireworms that then enter through the holes and devour parts of the seastar from the inside out. For more info (and the sources for this blog) see:

"The Faustian Traits of The Crown-of-Thorns Starfish," a fantastic landmark paper by Charles Birkeland.

Video (short) on crown-of-thorns outbreaks and ecology from the Palumbi Lab at Stanford: http://www.stanford.edu/group/microdocs/crownofthorns.html

"Coral-Eating Sea Star Invaders Turn Out To Be Locals,"  mentioned above.

"Tracking the Origins of Crown-of-Thorns Plagues" with comments from Rob Toonen (Toonen Lab) Another slightly deeper discussion of the above paper in Coral, The Reef and Marine Aquarium Magazine.

"There's No Place Like Home: Crown-of-Thorns Outbreaks in the Central Pacific Are Regionally Derived and Independent Events." The technical paper on the genetic stocks, free on PLoS ONE.

"Crown-of- thorns Starfish," Excellent general information article from the Reef Research Centre out of the Great Barrier Reef of Australia.

Hawai'i's Sea Creatures, A Guide to Hawai'i's Marine Invertebrates: Revised Edition, John Hoover, 1999, Mutual Publishing, pg. 293. If you look at marine life in Hawai'i, you should own this book.

Images from ARKIVE (if you have not visited this site, take a wander through - great images and purpose)
and the National Ocean Service Education page - also a fun site.