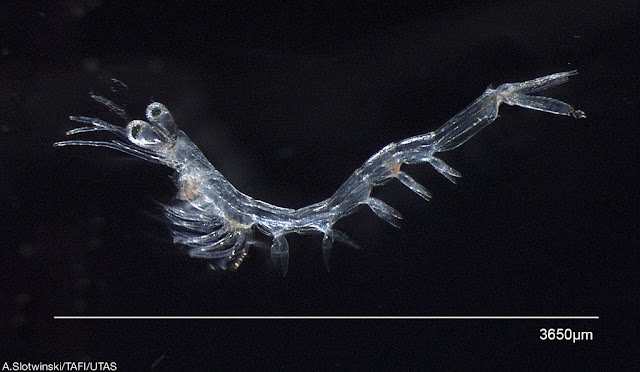 When looking through the microscope at plankton samples, students are often startled when we tell them that they are looking at "Lucifer." To be more specific, it is a planktonic shrimp in the genus Lucifer. But yes, this is a very grandiose name for a creature less than an inch long.

Students can only get a bit of the shrimp into view at a time. Usually they get a couple of the wildly kicking legs which are wrecking havoc with the rest of their sample. We help them follow the body outline up to the stalked eyes to make it more recognizable.

Shrimps of the genus Lucifer are characteristic of warm tropical ocean waters. Like their cousins the larger bottom-dwelling crabs and shrimps,  Lucifer shrimps belong to the decapod group. Decapods have 10 legs (this includes any claws - take a count next time you get crab at a restaurant to make sure you were not cheated). Unlike their larger bottom-dwelling cousins, Lucifer shrimps are are permanent members of the plankton community. They drift with the currents their whole lives.

Lucifer spp. are rather voracious predators eating other plankton (mostly animal) they encounter. Prey are quickly and efficiently shredded by the serrated mandibles. One study showed that food entering the mouth end could make it to the rear end as waste in less than 10 minutes (Lee, et. al. 1992). What a nice fast digestive system! One wonders what the spread of this impressive micro-predator might do to the new systems it moves into. A relatively recent article from China documents the northern progression of Lucifer shrimps in estuaries there over the last 5 decades, postulating that global climate change is at play here.

Of course there is turn-about-play here as well - as one of the largest planktonic animals around, fish can siphon Lucifers out of the water column like little Slim Jim's. And they do - they are a primary food of the endemic Hawaiian anchovey, the nehu, Encrasicholina purpurea. This was noted by Dr. Bob Hiatt, in an article in the first year of publication of the now venerable journal Pacific Science. Dr. Hiatt went on to found ourinstitution as a field station on Moku o Lo'e, so I feel a bit of special connection each time we find these in our plankton tows.

Lucifer shrimps are relatively short lived, probably 30 - 40 days although a few species can live several times that span. Like many marine animals, spawning takes place in the evening. For at least one species, L. faxoni, eggs are brooded by the female on the backsides of the third periopods (legs), with up to 30 eggs per brood. If the eggs become detached, they get eaten, even by the mother (thrifty).
The name for the group comes from a description of luminous (bioluminescent) plankton by John V.Thompson in the year 1829. As noted in the ever popular World Register of Marine Species (that would be WoRMS!), the original reference was: "Thompson, J.V. 1829. Zoological researches, and illustrations; or, natural history of nondescript or imperfectly known animals, in a series of memoirs, illustrated by numerous figures.
Memoir 3. On the luminosity of the Ocean, with descriptions of some remarkable species of luminous animals (Pyrosoma pygmaea and Sapphirina indicator) and particularly of the four new genera, Noctiluca, Cynthia, Lucifer and Podopsis, of the Shizopodae. Pages 37-66, plates 5-8. Cork: J. Hennessy, French Church Street Press."

In this case, the term "lucifer" does not refer to Satan, but more directly to the Latin translation of the the word which means "light-bearer," the name also given to the morning star, Venus. Interestingly, some 50 years later in 1885, the French scientist Raphael Dubois would coin the terms luciferace and luciferine, which would ultimately resolve into the internal chemicals used by many organisms to glow (including fireflys).

We have not seen bioluminescence in our specimens, but after a bit of searching, I finally found a wonderful image of a glowing Lucifer via Xiamen University's Department of Oceanography.

Mr. Thompson would have been pleased with the photograph I think. When discussing the Lucifer shrimp, his exact words were that the group, "conduces to the sparkling appearance of the sea in Tropical regions."

For more nice images of a Lucifer species off Australia, check out the Guide to the Marine Zooplankton of south eastern Australia. This is where the above image came from.

Effect of global warming on the distribution of Lucifer intermediusand L. hanseni (Decapoda) in the Changjiang estuary. Progress in Natural Science, Volume 19, Issue 10, Pages 1389–1395
Posted by HIMB CEP at 5:27 PM