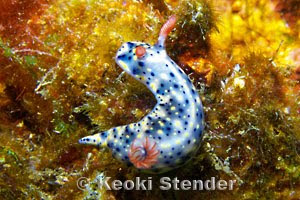 In the algae lab this week, Cindy found a Painted Nudibranch, Hypselodoris infurcata (Ruppell and Lueckart 1828). For its kind, it was a monster - being a full 2 inches (50mm) long. It was cruising through the invasive seaweed. Probably feeding on sponges.

Sea slugs are wonderful animals that have captured the imagination of generations of divers, beach goers and budding marine biologists. They have been called the butterflies of the sea, because of their brilliant colors and patterns.

For the type of sea slug like the one Cindy discovered:

1. It is a "nudibranch" sea slug - meaning it has naked gills, referring to the flower-like plume of gills that can be expanded up out of an opening on the back of the mantle of the animal.

2. It is both male and female at the same time (most nudibranchs are - makes mating so much more efficient).

3. Eggs are laid in coiled ribbons on the bottom .

4. It has been observed in other parts of the world to feed on sponges. Most likely true for the ones here also.

5. It probably has very very few predators. (True for almost all sea slugs - they tend to specialize in being able to eat things that are toxic to other animals - and in the process they become rather toxic themselves - so not much eats them).

6. It has a fantastic pattern that would seem to make it very obvious - like a warning coloration when removed from its habitat, but in fact like many sea slugs it was not that easy to spot when in the seaweed. It looked like another clump of mixed sponges.

Finding this sea slug is one of the things that makes working and volunteering at HIMB so much fun. Strange items show up and we get to share them.

I put the nudibranch in one of the water tables last night, but it was already gone by morning.... I think. Actually I am not at all sure. It could just be in one of the clumps of seaweed and sponge. We will have to keep our eyes out for it.

For a great site with pictures and information - go to the Sea Slug Forum!