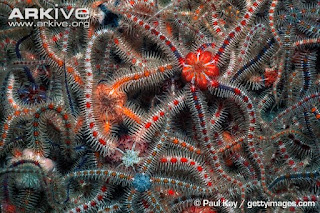 Brittle stars, one of our invertebrates in our touch table, belong to the class Ophiuroidea.  The class name derives from ophis, the Greek word for snake and they are often referred to as serpent stars. There are over 2000 species of brittle stars in the world, however Hawaii only has about 57 known species.


Most of you have probably seen the tiny bodies of the these invertebrates attached to coral, sea cucumbers and different things in our touch table. Unlike traditional seastars, which have suction tube feet to hold on to things, brittle stars have only non-suction, pointed sensory tube feet.  They use their long spiny arms to hold onto things instead. Their arms are extremely flexible when moving side to side, but not when moving up and down. As they move, the long arms grip and pull their bodies along, with one arm serving as the forward directing point and other arms pushing/pulling the body along the path. Some brittle stars can move surprisingly fast; but generally, having several long and lanky arms to manage can make travelling time consuming, so most move very slowly along the seabed, taking that time to feed on dead organic matter.  When doing so, they gather in large groups and collectively filter food from the circulating water around them. Teamwork! We often see just their legs sticking up out of sponges on the reef, looking like fireworms as they collect food.


Brittle stars are in the Echinoderm phylum. Like other echinoderms, they have a five-part body plan, with a distinct central disk and 5 arms.  However, one of the more common brittle stars manages to add one more arm to make a total of six, so don't be surprised if they have gone beyond the norm.  They vary radially in size and color. Many are tiny, like the 6 armed ones in our touch table which generally do not reach over 2 cm or so.  But others found inter-tidally in Hawaii under rocks and such can have arm spans of 10 inches or more. They do not have a head or brain. Instead they have a simple ring of nerve cells that moves information around the body. Their small tube feet located along the arms can also sense light and smells, making them a key part of the brittle stars body plan.

Because these invertebrates are, well "brittle," their arms tend to break off.  However, they have the ability to quickly regenerate their arms.  If they are grabbed by a predator, they can drop an arm allowing for escape as a defense mechanism.  Try to keep this brittle star tactic in mind and be very cautious when handling them.  The arm may grow back, but they will be hindered in movement and feeding. 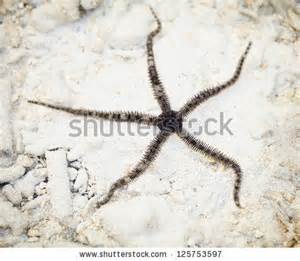