How old is that tiny fish on our reef? 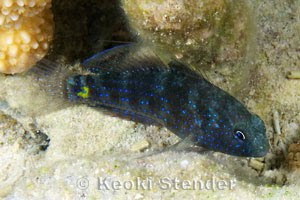 How old is that fish?? Below is an excerpt from a paper on fish longevity. It includes information on one of the little gobies (fish) that we often see perching on the reef. One of these halfspot gobies was even caught during an algae lab we did this last year.

If you want to see the whole paper, let me know.

"An example of the increased longevity of a goby, when the perils of life in the wild are removed, was provided by Lisa A. Privitera (pers. comm.). She studied the reproductive behavior and ecology of Asterropteryx semipunctata (Halfspot goby) in the Hawaiian Islands (Privitera 2002). Her largest fish at the time of collection measured 46.5 mm total length for females, and 56 mm for males, therefore comparing closely to 45 and 56 mm (about 2 inches) for the same species of fish studied by Hernaman and Munday in Queensland. As mentioned, the age of the oldest of their 162 fish was 16 months.

Privitera’s fish were collected in 1987 and placed in an aquarium at the Hawaii Institute of Marine Biology of the University of Hawaii. The tank was needed for another student in 1998, so her fish were at least 11 years old when released. The largest male was estimated to have grown to nearly 80 mm in total length (over 3 inches).

The long survival of Asterropteryx semipunctata in the aquarium and its reaching a greater length than any reported for wild-caught fish lends support to the explanation of the relatively short life of this species in the sea due to mortality from predation and other causes."
Posted by HIMB CEP at 8:21 PM