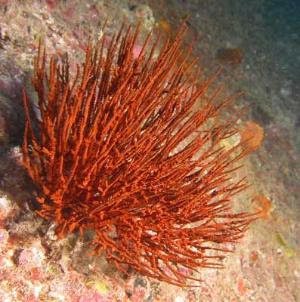 Sal brought in an interesting article from the StarAdvertiser today.

Why in the world would a black coral, 1000 feet down, have photosynthetic algae? The assumption has always been that they don't. Yet, HIMB graduate student Daniel Wagner (who also created our Touch Pool sign)has found that over two thirds of the deep water black corals they checked had the photosynthetic zooxanthellae (zooks for short)in their tissues. .

Zooxanthellae are common symbionts in our reef building corals and critically important, providing nutrition and promoting the calcification process. In fact, many of our corals will die if they lose their symbiotic algae partners - a condition known as "bleaching" since the coral looks white without the brown zooks inside them.

But at this point, the "why" zooks are in black corals is not known. It is startling enough to coral scientists to simply discover that they are there, in the dark, 1000 feet down.