Sometimes there really is less time in the day 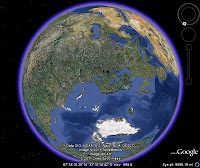 Recently a research scientist for NASA's Jet Propulsion Laboratory calculated the effect of the Japanese earthquake on the earth's rotation.

The possible effect would be to increase the planetary rotational speed. So, because we will be rotating faster, the length of a day will be shorter. We will be losing 1.8 microseconds each day!

Actually it turns out that there are lots of things that can alter the planet's rotational speed: winds, weather, ocean currents, earthquakes. Anything that messes with planetary drag or mass distribution can change rotational speed. Think about being on a merry go round with folks randomly moving about in a gusty wind storm.

The planet seems so stable to us that we just don't pay much attention. And that is great, I prefer to live in uninteresting times. But let's keep an eye on things, we may not have control over earthquakes, but we do have large input into other planetary systems - such as climate, weather and ocean systems.

As to the increased rotational speed - now I know why I just can't seem to catch up on my projects. The merry-go-round keeps changing speed. I am sure that if I just had that 1.8 microseconds extra, I would be caught up!