At HIMB we are working to expand our reach to foster the next generation of scientists and reef managers. This is a story of one such student who came from Castle High School, had a great time doing science and is now well on her way! 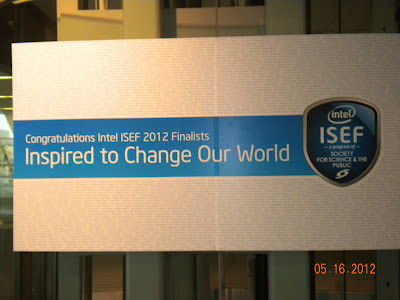 Before I start college at UH in the fall, I want to think back and tell you about my internship at HIMB, the Intel international Science and Engineering Fair and how I got there. The Fair itself was amazing! I couldn't believe how many interesting projects and people there were! They had so many activities for us to do! We got to visit Heinz field, the Penguin's brand new rink, the Carnegie Science Center, the Sports Center, and I got to watch a Pirates game. I got to meet many students all around the world through pin exchanges and dances! It was really fun!

But getting there started the summer before in 2011, when my teacher introduced me to Mr. Heckman at Coconut Island who agreed to became my mentor for my Senior Project class at Castle High School. I had to come up with a project that I created and nurtured (with guidance), and I really wanted to do something big that would contribute to society somehow and would bring awareness to people about protecting our oceans. Mr. Heckman suggested I do my project on human impacts on seagrass, which, I have to admit did not sound very interesting at first. He introduced me to Dr. Kimberly Peyton from the Thomas lab, who taught me what seagrass is, how it benefits marine life and ecosystems. I began to get very excited.

We worked on the seagrass meadow off of the swim beach at Coconut Island. One day, as we visited the meadow, we saw fifteen kayakers from the marine base race get out of their kayaks and race each other to the shore without any knowledge of what they were trampling under the water.

I worked with Dr. Peyton and Deena Gary, a HIMB volunteer who is working on coral breakage, both of whom helped guide me through the hypotheses, set up, procedure, and data analysis. We set up twelve alternating lanes on the seagrass meadow. Six of them were treatment lanes and the other six control lanes. Based on what we had seen that day, we decided to  trample the treatment lanes 15 times down and back. I used a quadrat to count seagrass pairs and percent cover per square meter, for pre-trample data, immediately after trampling, and recovery within an eight week period.

Before I began working on this project my teacher suggested that I enter this project in the District Science Fair. I thought it was a great idea! So, I entered it and I won first place! I was so excited! Not only would I move onto State, but I would be automatically a finalist for the Intel International Science and Engineering Fair! They would pay for me to go to Pittsburgh Pennsylvania in May to compete!
I really had fun doing this project. It was challenging and exciting to compete at all of the levels. I found that trampling fifteen times uproots seagrass by over 50% and recovery rate is about 8 weeks.

Next I plan to repeat this experiment on other seagrass meadows near the pier as well as expand my research to how different nutrients may affect seagrass growth. I also want to put up signs at the swim beach informing visitors about trampling damage. I would like to build on this project in college as well.

I want to thank everyone who helped to make this project possible and who supported me throughout the year. I can’t wait to continue this project!

As she starts her studies at UH-Manoa this fall, Rebecca also has a part time position with HCRI (Hawaii Coral Reef Initiative) and she will be back out at some point to continue the seagrass work.

We see her as one of the many that will be coming up through the expanding HIMB intern, education and citizen science programs. It reminds us that these programs do make a difference!

Mark
For a article on the native sea grasses at our swim beach, I am re-posting my seagrass blog from March below. For some PR on Rebecca, click to see a Midweek article "Teen Taps Science Tips From Coconut Islanders."
Thanks to Flo Thomas and her lab for supporting this work!