Ping (one of our volunteers) sent in an article from the BBC on pelagic thresher shark hunting behavior.

The article focused on a recent study of pelagic thresher sharks that showed they "accelerated through the water and then "stalled themselves" by pulling their pectoral fins together. They then thrashed out by dipping their nose and swiftly bringing their tail upwards and over their heads." The resulting snap produced bubbles at the tail tip (reminds me of the bubbles from the pistol shrimp pop) and was able to incapacitate small fish that the shark could then feed on.

Further on in the article, it is noted that a previous study on the common thresher (different than the pelagic thresher) showed that these used a sideways strike with their tail to hit bait. The sideways hit is interesting, fisherman have hooked thresher sharks by the tail for years and assumed that they were using their tails to herd or stun prey.

In the pelagic thresher study, they did see and hear of sideways hits, but side strikes were used much less frequently and only when the shark was swimming alongside a bait ball, rather than accelerating straight in. 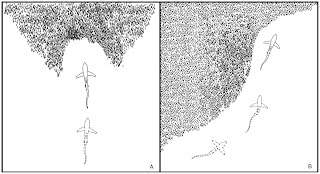 Pretty cool! There is obviously more than one way to smack a fish.

For the very readable BBC article with some great video and images, check out -  BBC:Thresher sharks stun prey with tail slaps - by V. Gill

The full scholarly article on the pelagic thresher behavior is available via the open accss Plos One journal. Go to: Thresher Sharks Use Tail-Slaps as a Hunting Strategy by SP Oliver, JR Turner, K Gann, M Silvosa and T D'Urban Jackson.

If you would like to check out the 4 videos from  the research article, with some comments, click on the image above and then preview the various files (or you can go to the the BBC link for the synopsis version).

Other resources:
The side strike behavior of the common thresher can be seen here: Shark mystery solved - why threshers have huge tails - again, excellent video and article. The research this was taken from is available via a restricted access journal, but if your library gives you access, see:
The functional role of the caudal fin in the feeding ecology of the common thresher shark Alopias vulpinus by SA Aalbers, D Bernal, CA Sepulveda.