The green sea turtle (chelonian mydas) or honu is commonly seen around  This gentle beauty is an ecotourism celebrity around as they come to the islands from their nesting grounds at French Frigate Shoals in the to feed. 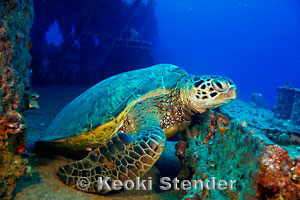 Fortunately due to conservation efforts the populations have increased 53% over the last 25 years in , but a new threat to their populations has presented itself in the form of a disease.

Fibropapillomatosis (FP) is a debilitating neoplastic disease that shares similar DNA with herpes virus. Although the disease was first reported over 50 years ago, in the last decade some populations the disease prevalence is as high as 92%. And it affects at least five other marine turtle species in places including North and South America, Australia, Asia and the Hawaiian Islands

The disease is characterized by either internal or external bulbous tumors. Tumor size may vary from 0.1 to more than 30 cm in diameter. As a result of indirect effects of tumor growth, affected turtles become emaciated, bacteremic (meaning they have bacteria in their blood), immunosuppressed, and anemic. It can also be detrimental to their visibility if the tumors are around the eyes, making it harder to avoid predators or surrounding obstacles. Interestingly, the virus is only present in cell samples taken directly from the tumors and not any of the surrounding skin. 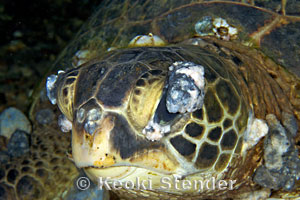 Dr. Mathias Ackermann who conducts research at HIMB is studying whether the disease (ChHV5) may have a transmission vector that was introduced along with the invasive algae in . The algae was introduced from the Philippines and Caribbean in the 70's and may have brought along a specific marine leech called Ozobranchus. Ozobranchus inhabits the algae and since the turtles like to forage on the algae, there is direct contact if the leech carrying the virus bites on to the turtle. Otherwise, turtles do not often come in contact with one another, aside for when mating or accidentally bumping into each other, so the transmission method is an interesting study.

Efforts have been made to surgically or laser remove the tumors in several facilities, and some studies also show that if the turtle is able to survive the onset of tumors they can decrease in size over time. So there is lots of hope for our neighbors in the near future!