Last week, I was lucky to be able to spend several days on Kaho'olawe with a group led by Frannie Coopersmith from Maui College.
I find it very difficult to condense down the experience. The island is strongly linked to Kaneloa, god of the deep sea, who could manifest in a variety of ways: whale, dolphin, or octopus (with the strong pull of the tentacle). True enough, the first morning, while I was contemplating the ocean and doing my normal imagining that I was immersed in it, I found it impossible to do so. I kept feeling a strong pull from the island at my back.  So I gave up thinking about the water and went with the flow, I turned my attention inland first, to Kaho'olawe.

Although I was expecting to see some bare land, having heard that the island has lost up to 10 feet of soil in places, it was still a shock to see.  Take a look at the image above and imagine an additional 10 feet of topsoil with green plants on top. In places boulders that had once been up on the surface are left stranded on the hard pan below.
We stopped at an area where Frannie had helped do the plantings many years ago - some plants survived and some did not. Note the effect of the near constant winds on the plants and the soil.
Frannie pointed out one survivor, a low endemic version of naupaka - beautiful to see.
There are continuing attempts to stop the erosion, to slow the winds over the ground and retain moisture. One of my favorites was the creative use of recycled plates from the a local hotel. Placed at an angle in the ground, the plates are dew and rain collectors and slow the wind - they look like modern art as well.
The island will come back, I am sure, it will just take a long time.
We took a drive up to the top of the island, from there you can see forever. In the old days, a cloud bridge would form from the slopes of Haleakala on Maui to the top of Kaho'olawe. Perhaps as the plantings proceed, the cloud bridge will reform more often and add water to hasten the process of Kaho'olawe's rejuvenation.
Our guide Dean pointed out that the westernmost 'ili (land division) here is called Kealaikahiki, the channel below is the Kealaikahiki channel, and the strong wind blowing at us was the Kealaikahiki wind . . . obviously there is something important going on here.  An examination of the meaning of the name makes things clear,"According to tradition, it was at Kealaikahiki that “voyages to foreign lands (Kahiki) were begun,”[v]and also the spot to which they returned. Kealaikahiki means “the way to foreign lands,” [vi] and “the pathway to Tahiti.”[vii]"

So this area was possibly the original landing site for the first Polynesians from Tahiti and the site to launch from to do a return trip.

Also from, "Lae o Kealaikahiki (“Point of Kealikahiki”[viii]) the northern and southern horizons are visible, allowing navigators to see both Hōkūpa‘a (the North Star) and Hānaiakamalama, the Southern Cross" (Hawaiian Encyclopedia).

And the night sky was wonderful, stars as bright as on the open ocean. It is easy to see the island's importance to traditional navigation and the training of new navigators. Note the shells on the platform above, dividing the night sky stars into sections for studying navigation.
We did a couple of coastal hikes. Those white spots on the rocks above are not shorebirds (as my wife Terry first thought upon seeing the picture), they are 'opihi! Dean Tokishi and Jen VanderVeur from the KIRK science group had the students simulate one of the 'opihi surveys they do routinely for both the KIRK (since traditional sustainable harvesting is still allowed) and for Chris Bird and HIMB's Rob Toonen's 'opihi project (check out the TNC article on this).

On another day, I went for a long snorkel while the students learned fish survey techniques. It was as interesting as expected. Note the cushion star, the mu, the unexploded ordinance (the island is barely cleared of old unexploded shells, the ocean is not cleared at all ) and the uku which was much bigger than it looks. I was thinking that it was big enough to give me a hard time when it first swam by, reminded me of the ulua in the NWHI. The image below is by the time I managed to get my camera out.


Would I go back? Sure, if I was invited and if there was work to be done that I could do.

I leave you with this image of a 700 year old wiliwili tree from the island. Somehow it has survived all of the years of humans, bombings, wind and rain. It strikes me as a symbol of hope. The island ultimately will survive. 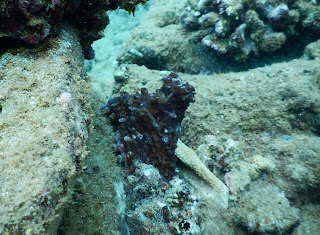 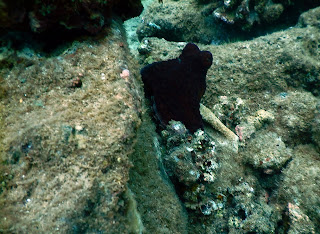