Leon here, doing this week's blog on my recent trip to Kalaupapa. For a bit of background on this trip,  I am a full time Kupu intern for the Community Education Program.  Kupu is the nonprofit home of the Hawaii Youth Conservation Corps, which uses AmeriCorps to fund conservation, education, and community service internships for young adults. To round out our training and experience, KUPU offers occasional field trips. On November 18th, I was given the opportunity to join my fellow second-year Kupu interns on a service project to the Kalaupapa settlement on Molokai's Makanalua Peninsula.  For four days we immersed ourselves in the rich history of the area, assisted with local conservation efforts, and were able to talk story with the people who live and work there.
This was the first time visiting Molokai for the majority of the group, myself included.  The lack of development on Molokai was refreshing.  Miles of straight road rolling over hills without another car in sight.  I wonder if these people have ever seen traffic?  The rusted out cars at the trail head envoked the sense that those who wander down into Kalaupapa don't always make it back.  Within a few minutes of hiking we reached the lookout at the top of the pali for our first grand view of Kalaupapa.  The peninsula looks flat by comparison to the monstrous coastal cliffs, rumored to be the tallest in the world.  According to the High Sierra Club, the trail drops about 1,700 feet down 26 switchbacks and is over three miles long.  This trail is the only means of accessing Kalaupapa by land.  Visitors have the option to boat in, fly in, ride a mule down the trail, or to hike in if spry enough.
The isolation provided by the pali played a paramount role in Kalaupapa's tragic past. This area was made famous for its use as a colony for people afflicted with Hansen's disease, otherwise known a leprosy.  Starting in 1866, people showing signs of Hansen's disease were taken from their families and sent here to die.  The system of managing Hansen's disease by way of quarantine lasted for over 100 years, during which time more than 8,000 people perished while in exile.  There were countless human rights violations against the Hansen's patients, especially during the formative years when aid to the patients was critically insufficient.

Life in Kalawao began to change with the arrival of Joseph De Veuster, otherwise known as Father Damien, in 1873.  Upon his arrival, Father Damien dedicated the rest of his life to improving the lives of the residents of Kalawao.  He eventually contracted Hansen's disease and became a martyr for his cause, drawing much needed attention to the plight of those afflicted.  Shortly before Father Damien's demise, he was joined by Mother Marianne Cope and several other clergy who carried on Damien's mission of service to the residents of Kalawao and later, Kalaupapa.  Both Father Damien and Mother Marianne Cope were canonized in 2009 and 2012 respectively.


In 1946, sulfone drugs, which essentially cure Hansen's disease, were brought to Hawaii.  Once treated, the patients were no longer contagious and in 1969, they were free to leave.  Some decided to stay and live out the rest of their lives in peace and quiet.  Currently there are less than ten patients who still reside in the sleepy, 1950's-style settlement.

For out first day of work, we helped with grounds maintenance at the nursery where the National Park Service is propagating several rare indigenous and endemic species including dwarf naupaka (Scaevola coriacea), ohai (Sesbania tomentosa), wiliwili (Erythrina sandwicensis), loulu palm (Pritchardia spp.), and more. The loulu palm is Hawaii's only native palm that predates human arrival. To our apprehension, the palm stand at the nursery provided an excellent habitat for the very large Hawaiian garden spider (Argiope appensa).  Instant chicken skin whenever something touched my neck!

During our second day we were given the opportunity to visit the site of the original settlement at Kalawao, where the church Father Damien held mass in still stands.
The last day of work took us to Kauhako Crater at the heart of the peninsula.  Along the crater's rim we pulled out invasive plants and installed deer-proof fencing around endemic plants in an effort to protect the last known remaining low elevation dryland forest of its kind in Hawaii.
Later that day our wonderful hosts at the National Park Service took us on tour of the pristine Kalaupapa National Historical Park. 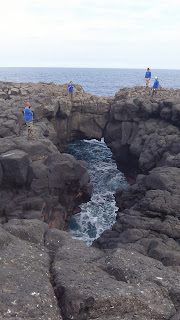 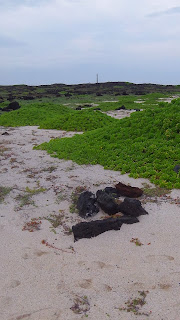 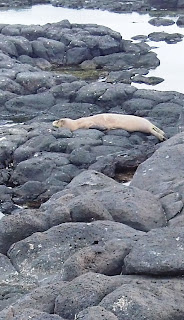 During the beach cleanup I had a chance encounter with the most endangered mammal in the United States, the Hawaiian monk seal (Monachus schauinslandi).  According to NOAA's Pacific Islands Fisheries Science Center, in 2011 there were at least 150 monk seals in the main Hawaiian Islands, and a total world population of approximately 1,100.
For our last night in Kalaupapa, we were invited to join the residents for one of their regular evenings of volleyball and barbecue.  The residents destroyed us at volleyball and served up some incredibly ono opehu kala, ahi, and introduced axis deer venison.
Later that evening I mentioned my previous encounter with the monk seal to one of the residents and was taken aback by his hostility toward the seals.  The man claimed that the monks seals were responsible for eating all the near shore lobster and a good deal of the local fish.  Fishing and hunting are very popular on Molokai, not just as sport, but as a good way of supplementing one's diet. Scorn for predatory animals perceived to be taking food off the table is understandable.  What caught me off guard was the level of contempt.
"Don't call it a Hawaiian monk seal, they're not Hawaiian!"
He considered them to be an invasive species, claiming monk seals were never mentioned in ancient Hawaiian oral tradition, so they must have been introduced.  He was convinced that a growing monk seal population would devour all the lobsters and possibly collapse the local fish stock.
Since my return I have been researching the Hawaiian monk seal, trying to find out where the local monk seals originated. Having been through Ocean Awareness Training I knew that there are three species of monk seal: the Hawaiian monk seal, the recently extinct Caribbean monk seal (Monachus tropicalis) and the Mediterranean monk seal (Monachus monachus) with a population of less than 600.  The genus Monachus comprises the most ancient linage of seal in existence, dating back to 11.5 million years ago.
Tracy Wurth from NOAA's Hawaiian Monk Seal Research Program provided some very useful information.  It has yet to be determined whether these three lineages of monk seal originated in Atlantic or Pacific waters.  What is known is that the only feasible route of passage connecting Atlantic and Pacific oceans was the Central American Seaway.  This seaway has been cut off by the isthmus of Panama for approximately three million years, meaning monk seals have populated the Pacific Ocean for at least that amount of time; long before the first Homo sapien (human), Homo neanderthalensis, or even Homo erectus walked the Earth.  In all likelihood, the monk seal has probably lived among the older Hawaiian islands since before the island of Hawaii emerged roughly one million years ago.
It's important that we try to understand the true nature of a perceived adversary.  Kalaupapa is an excellent example of what can happen when people confront a biological entity without being armed with the facts.  Fear, haste, stigma, and a misconception of the disease at hand led to an enormous amount of unnecessary suffering.  We now know that Hansen's disease is among the least communicable (contagious) of infectious diseases.  It can be easy to get caught up in rhetoric and develop a prejudice.  Given the misperceptions about the nature and behavior of the Hawaiian monk seal, and I strongly encourage everyone to discover the myths vs the facts.

For information regarding the biology of Kalaupapa, go to:
http://www.nps.gov/kala/naturescience/index.htm