Sal was walking in to work today when he noticed an encrusted mortar shell lying by the side of the path. Being obviously more aware of his surroundings than I am in the morning, he pulled up short. "How in the heck did that get there?" was his first thought, followed by, "That should NOT be there."

He did not touch it or move it. He called Jim, our facilities manager, the police came, followed by an EOD (Explosive Ordinance Disposal) team. When I walked up, there was a 50 meter perimeter already set up.

Now most of us in Hawaii have some experience with unexploded or old shells, casings and so on. Perhaps most dramatic for me was off of Kaho'olawe (image below), but - most all of us know not to pick these things up. Even if it looks harmless, you never know. As the EOD officer told me, a piece can be lying there for years, someone collects it, folks hand it around and around and then one day it just goes off. Bummer for the one holding it at that point.

So this seems like a good time to reinforce the guidelines for finding shells, bombs, bullets (some of which may be explosive) on the reef, at the beach, in the forest, wherever. The rules are simple:
1. Recognize, 2. Retreat and 3. Report. Do not take it home as a souvenir

I went to the DoD site on UXO and enjoyed reading through the material, although it was rather disturbing at points. Such as the comment that munitions are hard to recognize and can resemble a "baseball, soda can, or muffler." Hmm, that is clear as mud. I also like the warning on marking the location,

"mark the general area, not the munition, in some manner (e.g., with a hat, piece of cloth, or tying a piece of plastic to a tree branch)" (bold added).
You can easily imagine some yahoo saying, "I'll just put my hat on this bomb so we can find it again."

So resist the treasure hunter urge, mark the location and call it in. Don't we all have enough junk in our houses and lives anyway? Who needs a nice old munition that might unexpectedly explode. I don't know about you, but my life has enough randomly occurring drama as it is.

By the by, the ordinance Sal noted was apparently quite empty, which was a good thing. 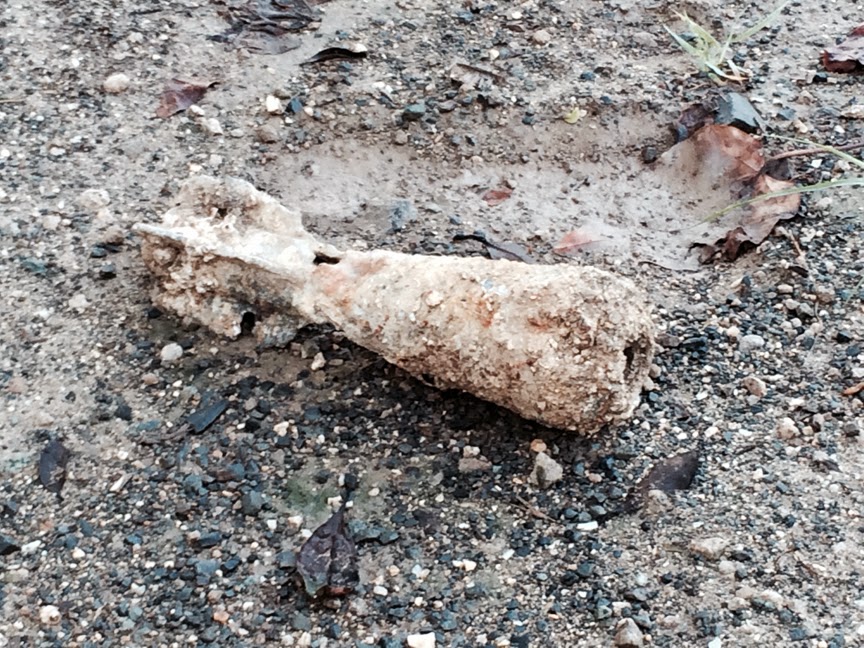 From the Department of Defense Site:


For more info, check out their site at: Explosives Safety