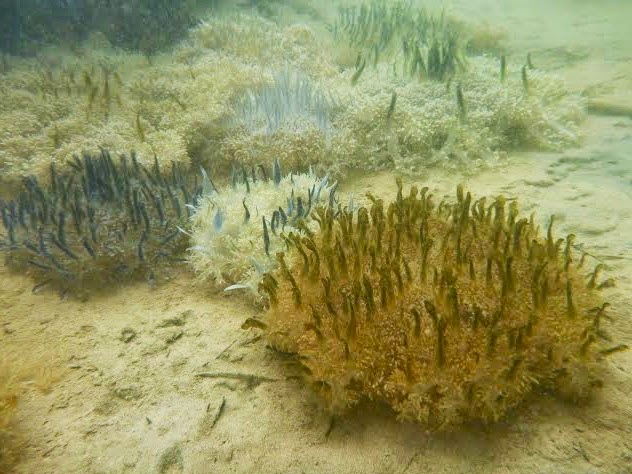 You may come across this unique cnidarian around Moku o Lo'e.  Cassiopea, also known as "upside-down sea jellies", are true to their name due to their unique nature of resting on the ocean floor with their bells face down and arms face up.  This positioning better exposes their undersides to allow their symbiotic alga  Symbiodinium spp. (zooxanthellae) harbored within their bodies to receive optimal exposure to sunlight, enhancing photosynthesis.


Upside-down jellies can be found throughout the Hawaiian islands in shallow lagoons on sand or mud bottoms or near mangrove patches. Like all of the cnidarians (the group that includes jellies, corals and sea anemones) they have special stinging cells, nematocysts,  in their tentacles allowing them to release toxic stings when threatened or to stun prey as needed.  When one jelly activates their nematocysts, it usually catalyzes the same response in surrounding jellies. As they are usually found grouped together, this can be a snorkeler's nightmare when one misplaced fin kick causes all the jellies to excrete mucus containing stinging cells in a chain reaction into surrounding water.  Obviously it is best to be the first snorkeler through the area!  Thankfully the sting is relatively mild, but still, when in the vicinity of upside-down jellies, it is in your best interests to be aware, proceed with caution, and be careful to leave them undisturbed.

Our local upside-down jellies were probably introduced to Hawaii around World War II. They most likely were released from various Navy or other ship's ballast water. With ships arriving here from around the world at that time, they could have come from virtually any ocean on the planet. Determining which species they are is surprisingly difficult. Almost all the Cassiopea worldwide look rather similar, and when they do vary in appearance, they do so across such a wide continuous range, that it is hard to say where one type lets off and another begins.

In Hawaii, scientists originally started by suggesting that we had a couple of different species, but uncertainty about the Cassiopea line led to them all being labeled as only one species, Cassiopea andromeda. Still, the high diversity of colors, shapes, and patterns among upside-down jellies in Hawaii sparked researchers to continue to question their classification.  The wide and beautiful range of appearances found near Moku o Lo'e are shown below. 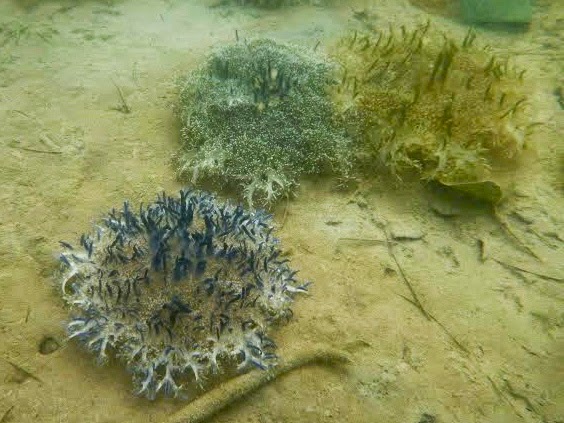 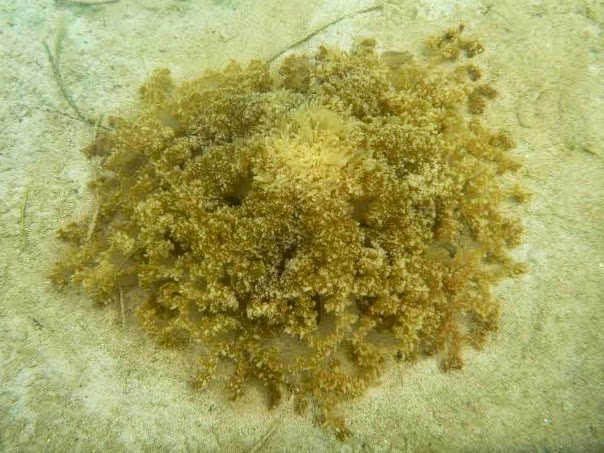 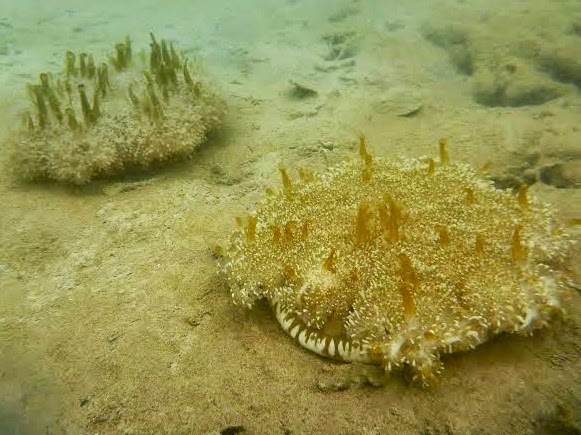 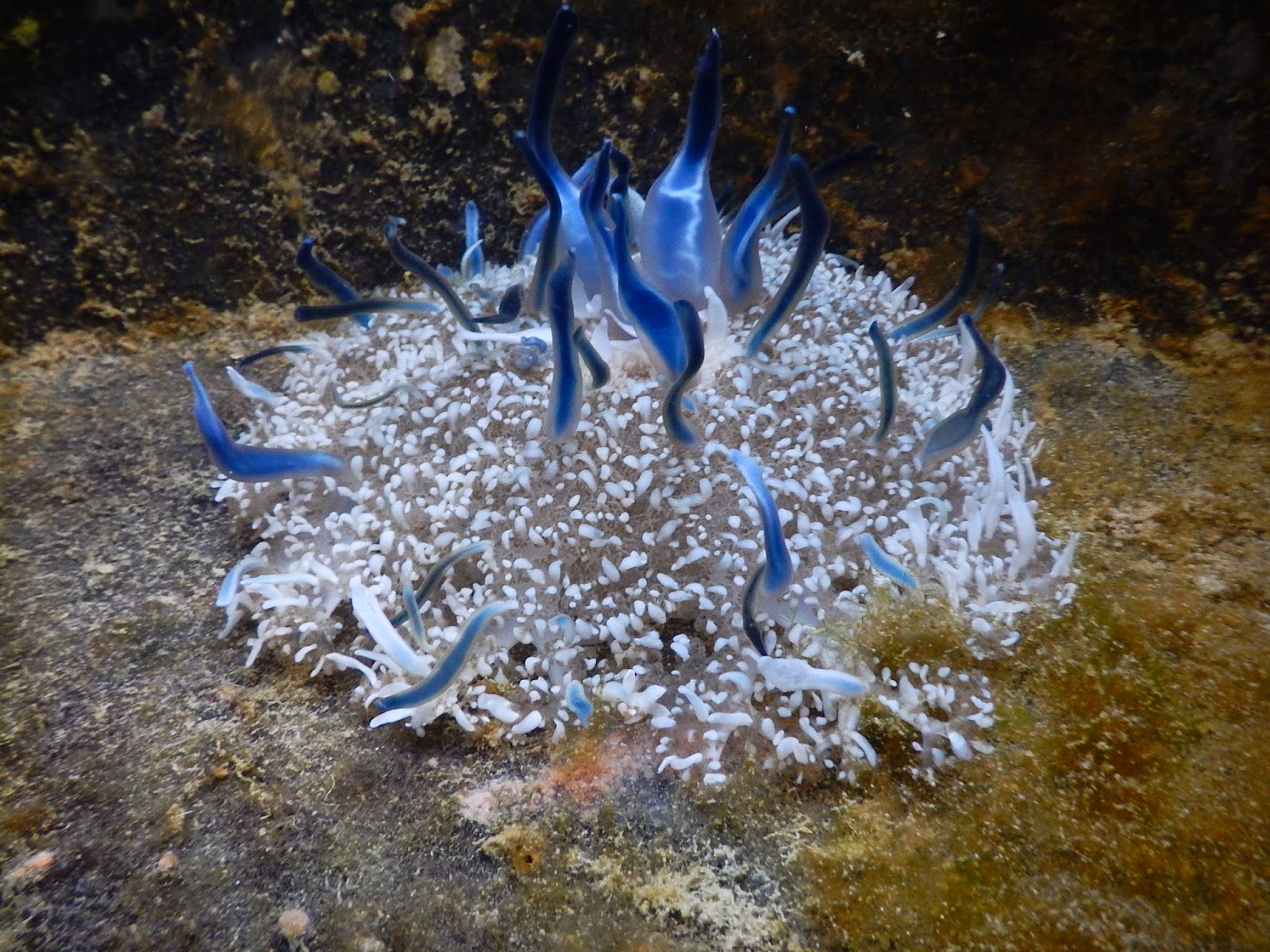 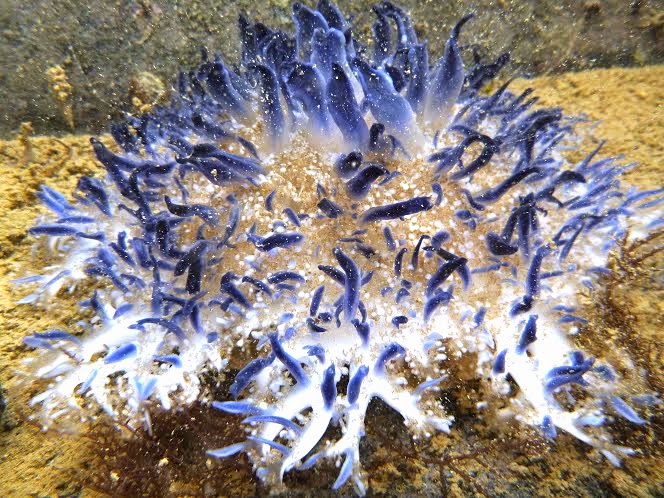 Even two jellies with identical blue and white colorations, can be noticeably different in pattern and shape.  Such observations further supported the possibility that multiple species of Cassiopea may exist in the Hawaiian islands.


Brenden Holland, Michael Dawson, Gerald Crow, and Dietrich Hofmann looked into phylogeography of the upside-down jellies on Oahu and observed two populations, one on the Windward side and one on the Leeward side.  They discovered these populations had variations in DNA as high as 20.3% - about what one might expect to find between two different species. When comparing the Hawaii jelly's genetics with those from around the world, the Cassiopea andromeda identified on the Leeward side has a genetic resemblance to those in the Red Sea and Atlantic Ocean. Less is known about the Cassiopea pinpointed on the Windward side, but genetic data supports connections to populations in or near Papua New Guinea. The authors referred to it as Cassiopea species #3. So it appears that there were two separate introductions of two types (species) of very similar looking Cassiopea jellies; a rare event among most organisms.

Ever wonder where corals, sea jellies and anemones get their zooxanthellae from? They can be passed down from parent to offspring (vertical distribution) or they can get them from the surrounding environment (horizontal distribution). Not all zooxanthellae are quite the same, there are a number of different clades of zooxanthellae (genetically distinct populations - see below) that have different characteristics, which may make them better or worse partners for their host.

A number of studies have been done to determine which species of zooxanthellae naturally reside within each coral, jelly or anemone through vertical symbiont acquisition (transmittal from parent to offspring).  However when Dr. Ruth Gates collaborated with Michael Stat and Emily Morris to determine which zooxanthellae are obtained through horizontal symbiont acquisition (transmittal from the surrounding environment), for the local Cassiopea there were some surprises.  They found that some horizontally transmitted zooxanthellae formed a parasitic, rather than mutualistic, relationship. Signs of the parasitic relationship included diminished growth rates of the Cassiopea and an increase in densities of the invading zooxanthellae. In Hawaii, this could be attributed to Cassiopea themselves having invaded from somewhere else, they are just not set up for some of the Hawaiian varieties of zooxanthellae.

Likewise, species of zooxanthellae introduced by Cassiopea form uncommon relationships with other hosts as well.  At Papahanaumokuakea, an unusual symbiont was discovered on the stony coral, Acropora cytherea.  Upon further analysis, this symbiont was traced back to Cassiopea and its introduction to Hawaii's waters through ballast water discharge from ships.

Despite their invasion, we can't help but awe over their beautiful lacy patterns and diverse coloration.  On Moku o Lo'e, we're known to have particularly exquisite populations.  In the past, HIMB has been sought out to collect upside-down jellies from our waters for aquarium displays.  Currently, an impressive grouping of our jellies are exhibited in Monterey Bay Aquarium.