The unnatural history of Kane'ohe Bay: coral reef resilience in the face of centuries of anthropogenic impacts 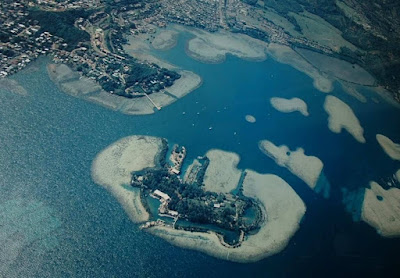 Fresh off the press is a new publication titled "The unnatural history of Kane'ohe Bay: coral reef resilience in the face of centuries of anthropogenic impacts" authored by graduate student Keisha Bahr, and HIMB faculty members Paul Jokiel (Point Lab) and Rob Toonen (ToBo Lab/New Pauley Lab).  This research paper examines how the estuarine reef ecosystem of Kane'ohe Bay has been impacted by anthropogenic (man-made) activities as well as natural stressors.  Human impact was measured in terms of sedimentation, introduction of invasive species, over fishing/harvesting, dredging and filling, urbanization of the surrounding area, sewage discharge, and increases in global temperatures due to anthropogenic fossil fuel emissions.  Natural stressors occurring in Kane'ohe Bay include exposure during very low tides, freshwater killing of coral due to storm floods, as well as greater temperature variation, sedimentation, and lower pH levels than more oceanic reefs.  Drawing from over 100 sources, the authors track the state of the reef in Kane'ohe Bay from the Polynesian Era (1250-1778) to the Western Era (1778-2015), and provide multiple projections of reef health in the Future Era (2015-2040).

One of the most interesting aspects of the Polynesian Era was the higher percentage of coral cover despite a greater human population residing in Kane'ohe than the nearly 35,000 people here today. This was due, in part, to the practice of sustainable agriculture and aquaculture.  The practice of aquaculture was so abundant in Kane'ohe Bay that by the 19th-century 30 fish ponds comprised 30% of the bay's shoreline.

While examining the major impacts during the Western Era, the authors discuss the introduction of invasive species, which currently account for approximately 14.5% of the bay's total biota.  One example of an invasive Kane'ohe Bay resident is the kanda (Valamugil engeli, syn. Moolgarda engeli), a species of mullet which is thought to compete with the native striped mullet (Mugil cephalus, 'ama'ama).  While the a mature striped mullet grows to three times the size of the kanda, as juveniles they are almost impossible to differentiate in situ (Randal, J.E., 2007).


Also thought to be in competition with the striped mullet is the stripped goatfish (Upeneus vittatus), which looks very similar to the native bandtail goatfish (Upeneus arge, weke pueo).  In 1974, it was discovered that the original U. vittatus type specimen had been lost and replaced with a similar goatfish species (Randal, J.E., 2007).


In the Future Era segment of this article there is a figure plotting the amount of coral cover in Kane'ohe Bay from 1250 AD up to 2040 AD.  From 2015 onward to 2040 there are two projections predicting future coral cover.  The label of the grim projection swooping downward toward 0% coral cover left me dumbfounded; "business as usual."  It seemed that "worse case scenario" would have been more accurate description, and that "business as usual" felt unscientific and indifferent.  The authors, however, explained the reasoning for said label masterfully, and I hope you take the time to read it for yourself at https://peerj.com/articles/950/.