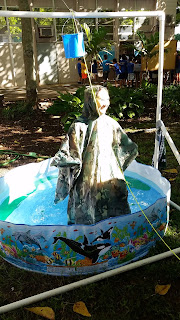 On October 23rd HIMB took part in the School of Ocean, Earth Science, and Technology (SOEST) Open House. Our goal was to educate school groups and families about how global warming and climate change effect Hawaii’s coral reefs as well as encourage the participants to think of ways that they could decrease their own carbon footprint.

For our ”Cool the Ocean” tent we built a structure that would hold a bucket above of a paddling pool that was painted to illustrate the earth. In the middle of the pool there was a chair where an unlucky parent, teacher, student or one of our staff would sit and wait in anticipation. The other members of the group received a short lesson about coral reefs, why they are so important and the impacts of global warming on them.  The group members were then asked questions relating to what they had just learned and had to come up with ways that they could help protect our coral reefs from the effects of global warming. If answered correctly they would be allowed to dump water on the person in the pool. This represented a coral in the ocean being cooled off and thus saved by the now attained awareness of the person. 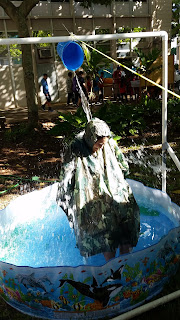 We wanted to engage and educate the public in an interactive and entertaining way, and what better way to encourage everyone to learn about the effects of global warming on our coral reefs than to reward them with the opportunity to dump a bucket of water on someone! It’s safe to say that we had a great variety of participants.  While some kids were very eager to soak their mentors, others were keen on having water dumped on themselves! This fun activity attracted kids and families of ages varying from 5 to 18.

At the end of the 2-day event, everyone had learned something new and gained a deeper understanding about how global warming and climate change affect Hawaii’s coral reefs.