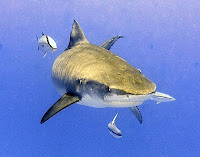 After having done the shark section of the volunteer training last night (basic biology, etc.), I noted the following article in the popular press this morning: "Man Eaten By Shark Near Jaws Movie Site!"

This particular article by the Discovery Channel was better than most in that it commented "At present, it remains unclear as to whether the victim was eaten alive or if the shark scavenged on Newton's already-dead body. Experts such as Marie Levine of New Jersey's Shark Research Institute suggest that the latter probably happened, since she said, "“With tiger sharks, it’s unusual for them to attack someone when alive. They don’t tend to go after something that’s alive and can fight back.”"

However this is always hard for folks to accept and any death is tragic. Whenever a new fatality arises, it is always worth a visit to the International Shark Attack site at the Florida Museum of Natural History.

For today, you might check out the page that looks at what folks were or were not wearing. See: Clothing and Gear Worn or Carried by the Victim of an Unprovoked Attack

What is interesting to me on this (other than the fact that apparently some of folks weren't wearing anything at all), is the difficulty in coming to ANY conclusion from the limited data. No clear pattern pops out despite folks that insist that bright objects are an issue, or dressing in black like a seal, or whatever. I had a friend that would not do the Maui Channel race for our team last year in her favorite yellow swim suit. Our chase boat was hoping she would wear it so we could keep track of her.

Mainly take a look at the statistics, although tragic, actual attacks remain thankfully a fairly rare event that are hard to find patterns to or within. So you can follow the various bits of advice you find on-line (stay out of the water at dawn and dusk, do not wear bright clothes, etc.) However, as Carl Myer has pointed out, 67% of local attacks happened between 10 am and 4 pm. As the the clothing statistics pointed out, you could be wearing virtually anything or nothing at all. Rare events are simply that - do what seems reasonable and is comfortable for you.

My favorites are avoiding areas with lots of chum or scent, murky water is always spooky anyway, and if you see an animal behaving in an unusual fashion (especially something large with teeth) get out of the water.