A New Endemic - the Hidden Species 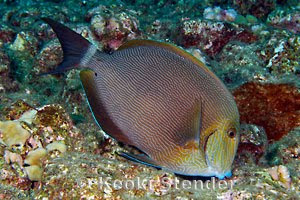 In biology, we talk about different types of animals, particularly at the "species" level. So a Bluelined Surgeonfish is a different species than the Goldrim Surgeonfish, which is different than the Brown Surgeonfish. They look different, often act a bit different, and breed true.

If we checked the genetics of the above fish, they would test out genetically different as well - as we would expect.

Hawaii has a number of "endemic species," animals that are found only here and nowhere else in the world. Their ancestors made it to Hawaii and, over long long periods of time, they have become different enough, or are the only remaining population such that they are now a unique species.

But what if - a species got here a very long time ago, and has indeed been genetically drifting (changing) inside, but still looks the same as it's ancestral stock on the outside? An ancestral stock that continues to exist across the rest of the Pacific (changing randomly inside in its own way).

Then one of these two fish populations would be a cryptic (hidden) species. They look the same but are not.

Researchers at HIMB have noted this recently for the Bluelined surgeonfish. The Hawaiian version is different enough from its relatives elsewhere in the Pacific for it to be considered it's own species.

A hidden endemic - kind of cool.