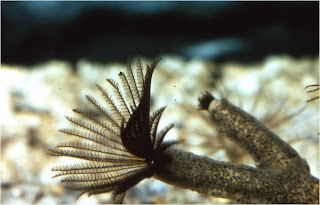 The topic for this week's bio-note is worms. Seems like we are constantly explaining to people that the sea cucumbers are not worms and the feather dusters are. How confusing this must be.

So - when people think of worms, they think of long squiggly things with segments. I think we can all agree on this. From here on out, however, it gets more complex. See how many of the following characteristics you can agree on:

Worms do not have legs. Worms are naked, pink and slimy. They do not have scales, fur, tentacles, feathers, or wear hats. 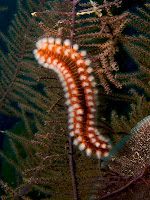 Now lets take a look at the above. First of all, lets go with the "worms do not have legs." True enough and in fact, when we do find worms with flaps and hairy bristles sticking out of every segment, people are sure they are related to centipedes. They are not. Fireworms have rows of bristles sticking out of each segment that can break off and be used for defense. Sort of moving cacti. For some amazing images see the "bearded fireworm". We tend to find small fireworms in our algae labs. 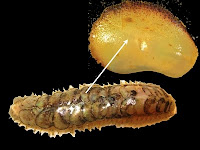 Next, scale worms have protective scales on their backs (but no hats). For a nicer look at a scale worm than the one to the right (from a UH-Manoa cruise to Antarctic), check out this site at the Bigelow Marine Lab. Scales have developed independently in many groups over time (fishes for one, which are distinctly not related to worms). Scale worms also take care of the "worms are naked" idea. Some are, some not.

That leaves us with tentacles and feathers. Over evolutionary time, many groups have developed bizarre feeding structures. In the case of the tasty worms (tasty to fish at least), it makes sense that those animals that could extend a feeding structure into the world without crawling right out into the open would have an advantage. Their lineages would survive.

Welcome to the spaghetti worms and the feather duster worms. 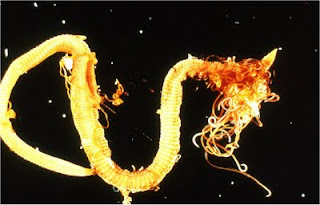 Both groups feature a basic worm body (with all the guts and important stuff), then an interesting feeding structure attached to the mouth area that can be extended out into the very dangerous world. And if it is lost or bitten, no worries, it can be grown back. 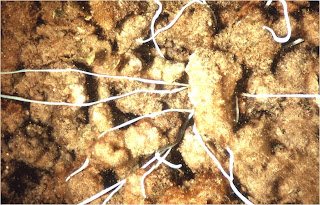 At any rate, enjoy the worms you encounter in the ocean, they are an incredibly diverse and successful group.