Researchers at HIMB, in a joint effort with researchers from the University of Tokyo, the Japanese National Institute of Polar Research, and the University of Florida, have discovered new tiger shark hunting techniques.  It has been known that tiger sharks swim in a yo-yo pattern, meaning that they swim up and dive down repeatedly.  It had been thought that this swim pattern was for energy conservation, hunting, or navigation, but the truth has been unclear. 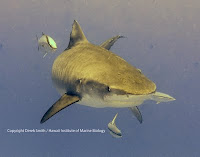 By monitoring the sharks' swim patterns, speed, and acceleration, researchers have found that tiger sharks beat their tails continuously while swimming both up and down.  This suggests that yo-yo swimming is not for energy conservation.  Camera images showed that the sharks regularly encountered prey fish.  One set of images even showed that the shark accelerated from the seabed to a school of fish, staying with that school for about twenty minutes.

This new research has led to a deeper understanding of shark hunting behaviors and how they are able to effectively comb a large three-dimensional space for prey.