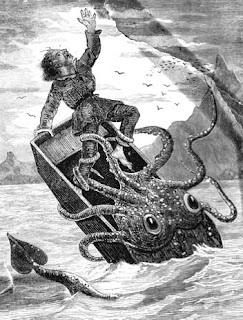 A previous post talked about what science is and about exploding scientists - or wait, scientists exploding things.
No sooner than I had written that blog, then I went to Google News and saw an article that was reported as science, but was clearly not. We are talking, "Bad Science."

Imagine this - a paleontologist takes his family on vacation to a nice fossil bed.
He sees some ichthyosaur vertebrae lying in straight lines.The ichthyosaurs were about 29 feet long with lots of teeth; impressive animals.The vertebrae and sediments suggest that they did not die at the same time and perhaps the water was deep. 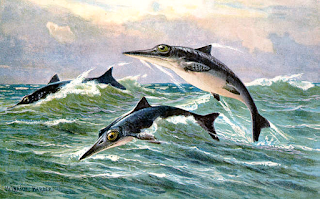 Good enough - a very cool thing has been noted. Next step - come up with ideas as to how these vertebrae could have come to be there in straight lines.

Any of us can do this. For instance, I could say that obviously this was a ichthyosaur mating area with males battling it out. The losers died and fell to the bottom. Then, hey, what a great area to scavenge! Bottom dwellers rooting through the remains leave some pathways, with bones to the side, nice and straight.
Or - the area was home to a very toxic fish, too bad for the ichthyosaurs - down they go. Some bones randomly end up lined up (bound to happen somewhere, sometime).
Or - the icthyosaurs died in a nearby bay area, but were washed down to a natural deep basin by a seismic event. During transport and settling, the bones naturally sorted by weight and size.
Or - a giant octopus (which we did not even know existed at that time because they don't fossilize well) ate the ichthyosuars and then lined up their bones in a self-portrait.
Or maybe aliens did it to try and communicate with us.
Or maybe we just don't know enough yet about the area and should keep going on getting more information.

Science is the search for verifiable reality. The reality we can all agree upon, regardless of belief or opinion. If science was just opinion, we would still be doing blood letting to get out the evil humours (it does make sense in a logical way, as long as you don't really test it). Good science is based on testable information. You have an idea and then you work to disprove it (not prove it). You invite others to do the same. You use testable ideas, clear lines of evidence and keep it simple.

Now back to our paleontologist from above, of the above opinions that I started with, which do you think the paleontologist went with to report on at a geology conference?

Oddly (not), the media jumped all over this and it made international news as well as a number of kids science sites.Never mind that there is zero evidence of a giant squid from this era (and some do leave marks and can leave beaks). Never mind that bones do get into regular patterns sometimes, just because of chance or foraging animals. Never mind that no (not one) modern octy lines up the bones from its prey. No, lets just go with the most sensational story we can think of, the one to get us the most media coverage and attention.

Too bad really - this particular guy likes to get his students to stretch their minds. Which is fair enough, but in this case, it is distinctly not science and just does a major disservice. We have plenty of whacko "theories" running around in the world. We don't seem to have much clear thinking. For science at least, if it is not testable - it is not science. Period.

Besides, I liked my obsessive complusive alien idea better. Maybe I can get some media coverage.

For the media stories see: http://theweek.com/article/index/220220/a-strange-bone-filled-lair-proof-the-kraken-existednbsp
or more critically:  http://news.discovery.com/earth/smokin-kraken-111011.html
Posted by HIMB CEP at 10:55 PM