What can you learn from a dead turtle? 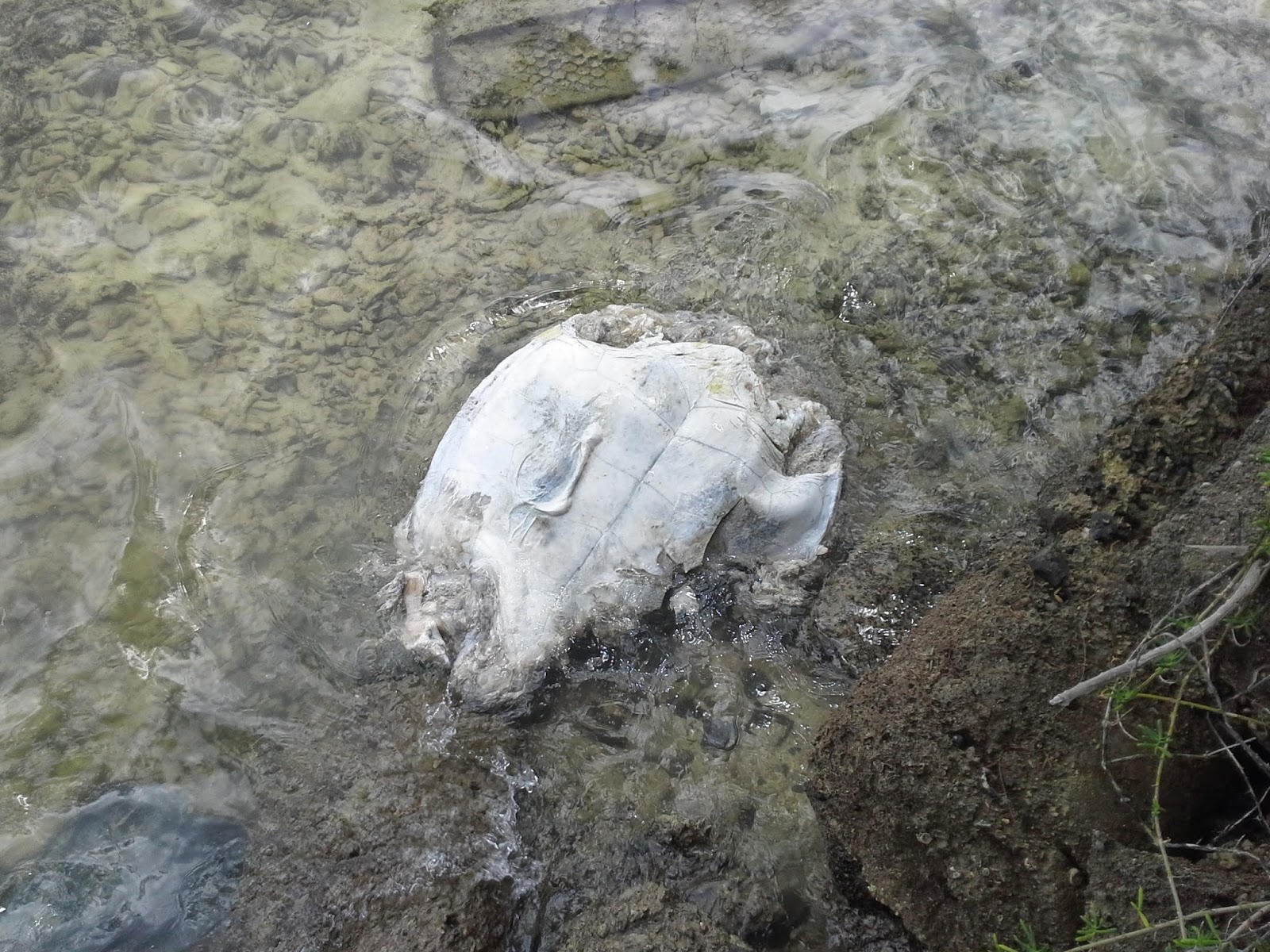 Over the last weekend, we noticed a bit of a smell along the shore by the Corrosion Lab site. A dead turtle carcass had washed up, so like any good biologists, we went to look. It was upside down, without a head or flippers and with what appeared to be parts of the shell missing.

The obvious conclusion would be that a tiger shark had been feeding on it and when we sent in the pictures that Larry had taken, Devon Franke from NOAA concurred that some of the scrape marks looked to be tooth marks.


So, did this animal get killed and eaten by a tiger shark? After all, tiger sharks eat turtles, but what if the turtle died from some other cause and then was just a convenient floating meal? I know that I prefer my food to be dead before I eat it. It is so much easier when it is not still trying to run away.

I think people have the impression that tiger sharks kill and eat more sea turtles than they probably do. Our new intern Kenzie Gauck went looking for information on this issue. She found a paper by W.N. Witzell in which an examination of 201 mid-Pacific tiger sharks revealed only 31 with turtle remnants in their stomachs.  So 15% of the sharks had recently eaten turtle - a reasonable amount, but not a huge number. They did not measure how much of the turtle was in the stomach, how digested it was, or so on, just whether it was present or not. A study done on dietary habits of tiger sharks here in Hawaii, by Lowe, et. al. showed that of 281 tiger sharks examined, only sharks over 7.5 feet in length had any turtle in their stomachs and that the proportion rose to 15% when they examined sharks over 9.8 feet in length. Turtle shell and parts might stay in the stomach longer than other food types, leading to an over reporting of  turtle compared to other items that might move through the system faster and be eaten more often, but I am just speculating here. Someone can set me straight if they know more.

We know that once turtles were protected by Federal legislation back in 1978, it took decades for their numbers to grow to the point that we actually commonly see them now - and they were never protected from sharks eating them during this time, only people. I suspect that the real issue for turtles is us.

We decided to flip the turtle over and look for any additional damage on the top of the shell before bagging it up for NOAA. By this time the decomposition had really set in. The nice shiny scutes had all fallen off. The main parts of the shell were starting to come apart, and the smell was actually not so bad. Leon picked up a bit of scute with some barnacles on it. 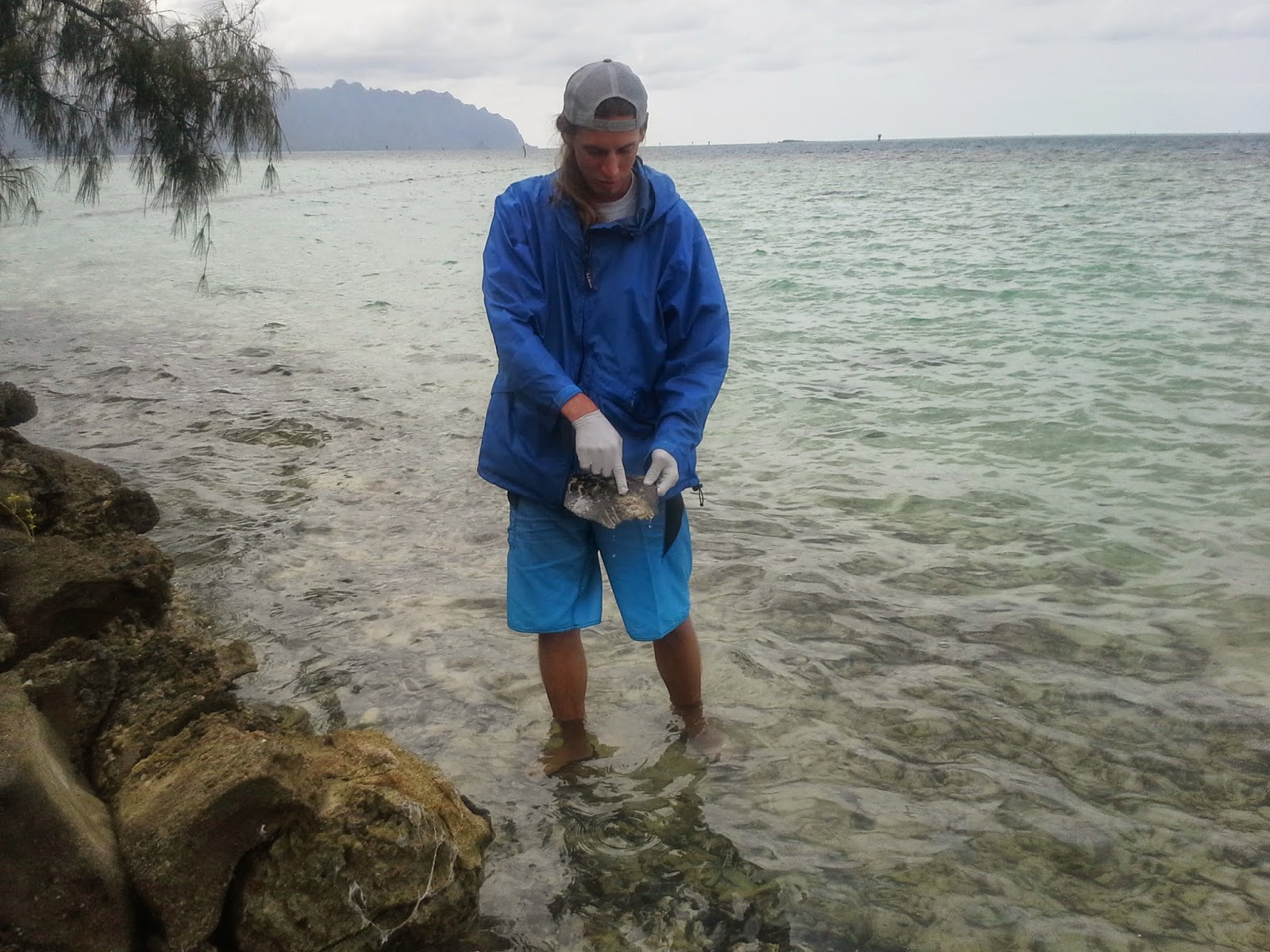 Below is an image of the top of the animal when we finally flipped it over. The shiny scutes are gone, only the bony plates below remain. You can see some additional breakage up near the center of the shell.

There is the possibility that the break is the result of a boat strike, but the shell is so decomposed that we will never know. I would think that with all of the power boats speeding around the bay, boat strikes must happen fairly often. In fact, the 1998 Green Turtle Recovery Plan lists boat collisions in Hawaii as a "primary threat" to green turtles. 16 years later with more turtles and certainly no less boats, it is hard to imagine that this is still not an issue.

We will never really know what came first, but I put my money on a boat strike, followed by a nice meal for a local shark, then the finishing smorgasbord for a whole host of very well fed crabs.

Sad for the turtle, it looked to be a good size. This reminds us to go slow and watch for turtles in the Bay.


Thanks to Intern Kenzie Gauck for the following links.