Chaetognaths- The truth about Arrow Worms


During our first plankton lab, we noticed some interesting worm-like creatures with vicious looking teeth. Under the microscope, we were able to observe some features that helped distinguish this creature as an arrow worm, also known as a Chaetognath (keet oh nath). They are not really worms in the traditional sense, in that they do not have segmented bodies. They are actually unlike any other set of marine animals, so they are their own phylum (group). There are about 150 species of chaetognaths known, all of them are marine and can be found in oceans worldwide. 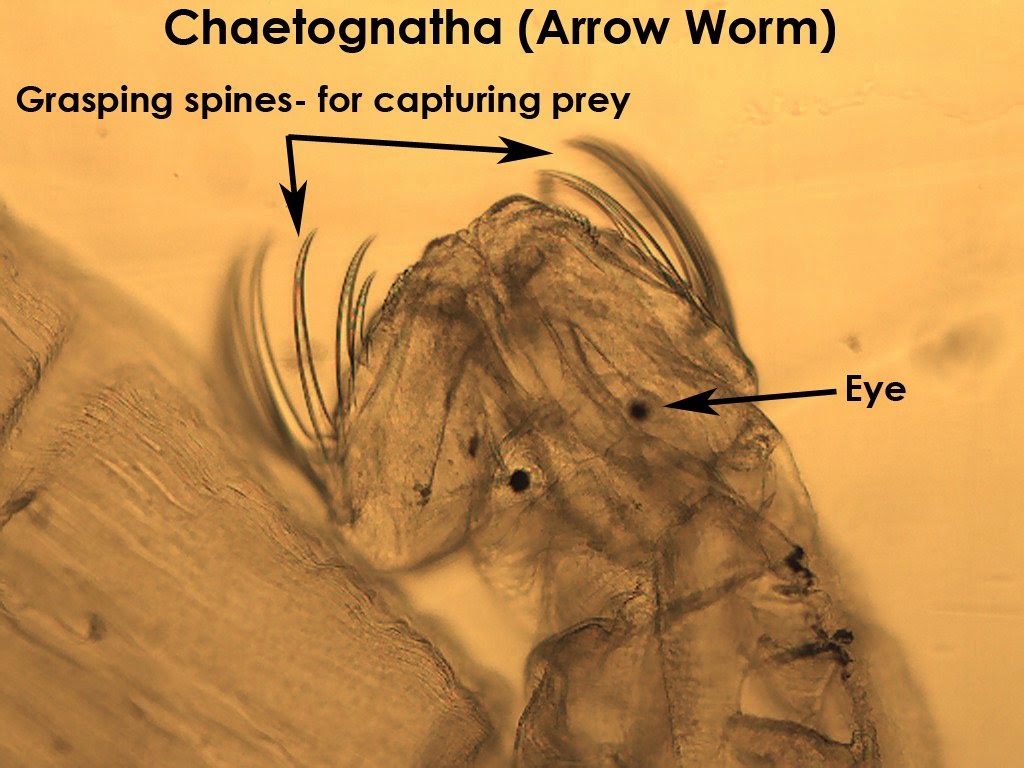 Arrow worms are zooplankton, small animal plankton (drifters of the sea). Unlike many zooplankton, which may be the young stage of familiar reef animals such as fish, seastars or even corals, arrow worms are holoplankton, they stay the same and remain plankton for their entire life.

One interesting fact about arrow worms is that they swallow their prey whole. Since they are clear, you can often see what they ate in their gut when looking at them under a microscope. Their main source of food is copepods and they find their prey in quite an amazing way. According to an article by Hiroaki Saito and Thomas Kierboe, Feeding rates in the chaetognath Sagitta elegans: effects of prey size, prey swimming behaviour and small-scale turbulence , chaeotognaths sense the vibrations from their moving prey and then attack them.


Arrow worms play an important role in the food web.  They are zooplankton predators that eat other zooplankton, which is an important initial step in the ocean food chain. The arrow worm in turn becomes food for fish larvae, which either grow up or are then eaten by larger marine animals.


These very cool, clear worms are not well studied. If you would like to know more details about arrow worms, you can visit our sources: