Tracking the life of a seahorse

Some may think that a seahorse would be in the species of a horse, but it really is a fish! They are related to pipefish and belong to the family of Syngnathidae. They have an elongated body with enclosed bony rings. To sum up the physical features of a seahorse, they have a horse-like head, monkey-like tail, and kangaroo-like pouch. Along with this, they are great at camouflaging and blending in with their surrounding environment.


Seahorses in Hawaii have been scarce until about 10 years ago (M. Heckman pers. comm.). It is not clear why there has been a rise in their population the last several years.

There has been a threat to seahorses for a few different reasons. There has been direct exploitation (using something in a cruel manner) of seahorses, capturing of seahorses in accidental ways, and the destruction and degradation of their habitats. These seahorses are being exploited by being sold primarily for use in Chinese medicine and the aquarium trade. According to Traditional Medicine Trade, it is believed that seahorses can cure ailments that range from asthma to arteriosclerosis, but there is no statistical data to prove this yet. The research and use of seahorses for medicine is causing a reduction of the number of seahorses in the ocean. 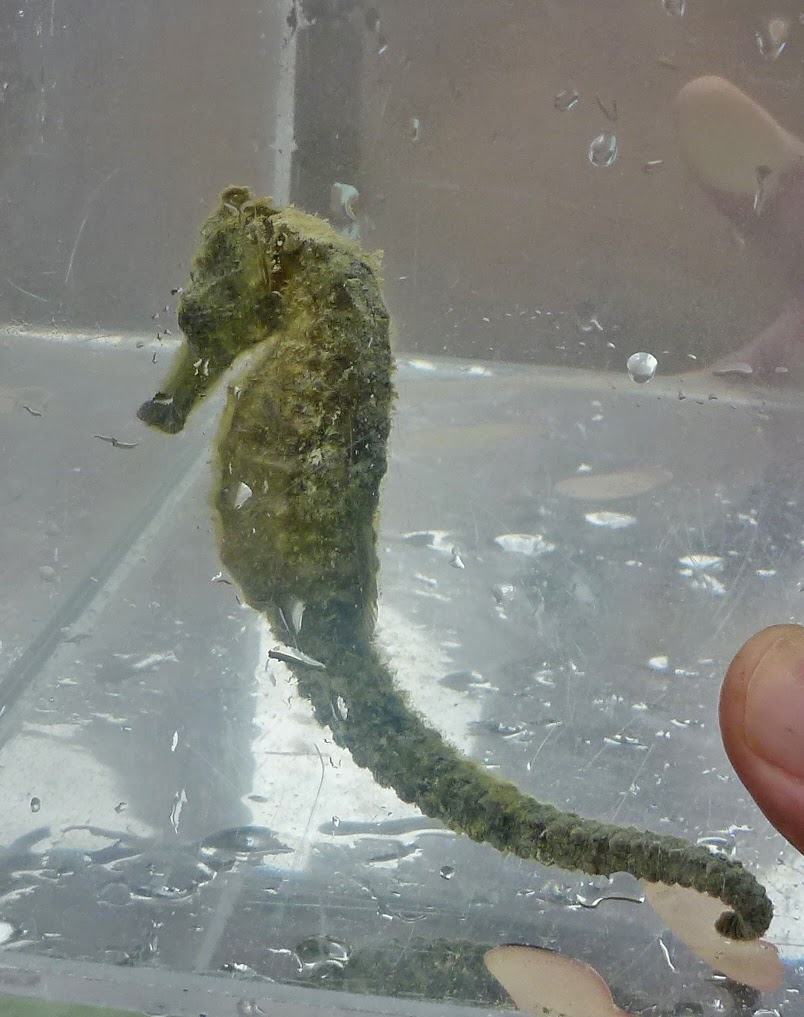 Seahorses are predators of zooplankton. They have to eat constantly because they lack teeth and a stomach, so their digestive process is extremely quick. Another interesting fact about seahorses is that the males are actually the ones to give birth. The male seahorse has a pouch on its stomach in order to carry the eggs. The female will deposit the eggs onto the male and he will carry through the process of pregnancy.

There has been a lot of current research about tagging seahorses and tracking them within the ocean. One experiment was conducted in the Ria Formosa lagoon in southern Portugal. In a paper by Iain Robertson Caldwell, he completed tagging and tracking seahorses with the use of external transmitters that were tied with cotton thread around their necks. He used a VEMCO directional hydrophone and receiver in order to locate each tagged seahorse. Iain would tag the seahorses by placing them in a seawater filled container on a boat during the process. This would take no longer than a minute. Once the tags were secure, he would monitor the seahorses to make sure they did not show any distress before releasing back into the ocean.

After tracking the movement of Hippocampus guttalatus for 150 minutes using GPS, he found that these seahorses moved from between 0 and 238 cm (about 7 feet), on average. The GPS allowed Iain to find the measurement of the straight line distance between each sighting location and release location, between sighting locations and the total distance traveled. The total distance moved did not differ a significant amount between tagged and untagged seahorses. It was also found that the behavioral status of the tagged seahorses did not change very much on a daily basis. It was also discovered that the male seahorses moved a significantly greater distance than the female seahorses. This experiment can be very useful in determining the movements of seahorses throughout the ocean. To learn more about his experiment, you can view his paper Habitat, Movement, and Vulnerability of Sedentary Fishes in a Dynamic World.

If you would like to learn about other research experiments involving seahorses, then visit these websites: