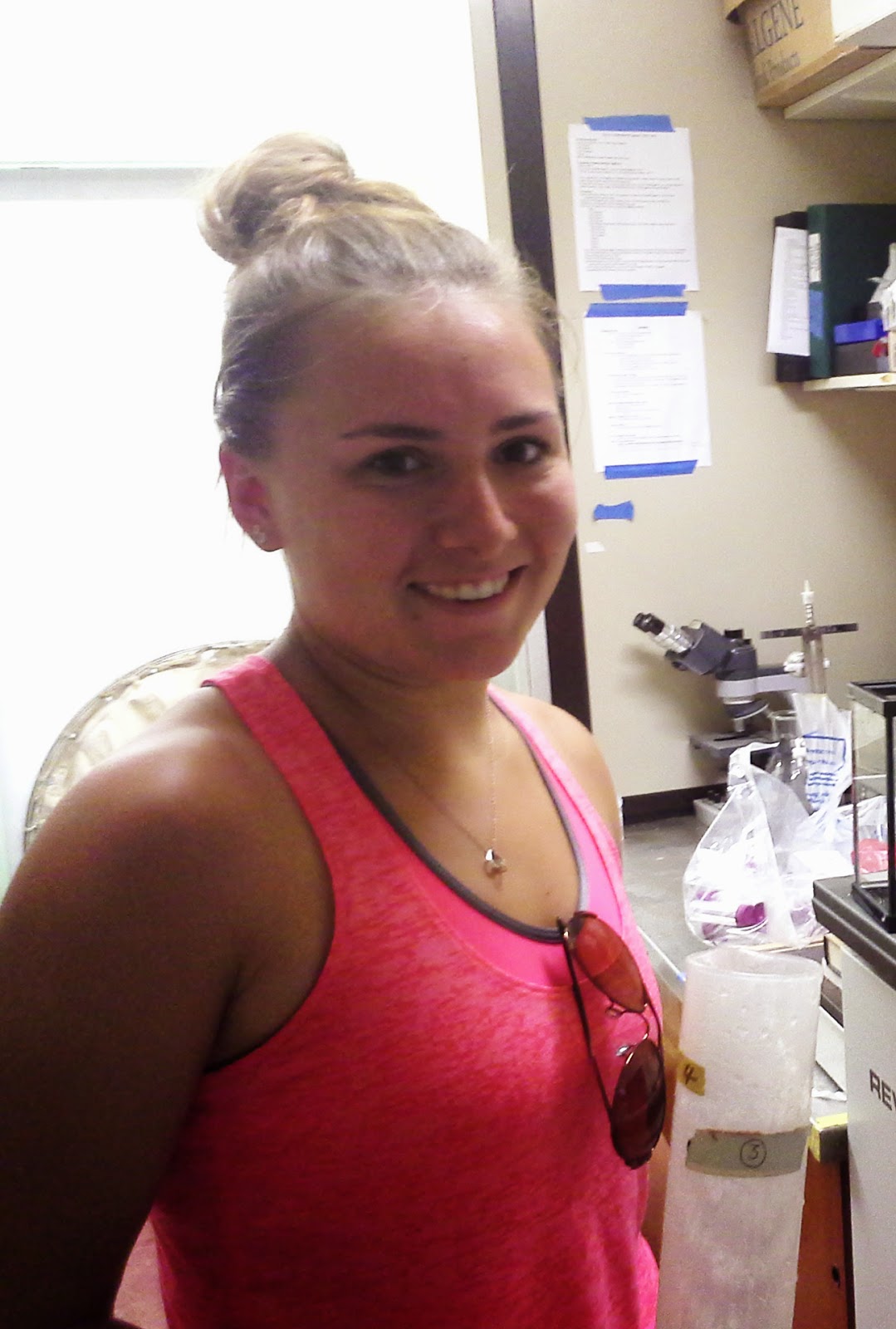 Since coming to HIMB, I have seen both healthy and diseased corals. I discussed my interest in cellular biology and the issues with corals and coral diseases with my sponsor, Mark Heckman, who brought up the subject of UV radiation and coral bacteria.  I decided to specifically look at coral disease and see what effects spot treatment with UV radiation might have on a coral’s bacterial growth. Corals are constantly producing fluid-like mucus, which would make it easy to obtain a specimen to test.

Mark introduced me to Dr. Amanda Shore of the Callahan and Aeby labs at UH-Manoa and HIMB, who had some bacteria streak plates and other gear I could use and loaned me a Steripen© that hikers use to sterilize water to drink in the back country.
I gathered three small Montipora capitata (rice corals) pieces, about 5 cm across, from our touch table and placed them each in a beaker containing one liter of salt water.  Prior to UV exposure, I gathered mucus from each coral (about 150 microliters worth of mucus) and placed each sample in an Eppendorf tube.  Three samples were taken from each coral.  Next, I exposed each coral to UV radiation.  the UV radiation source came from the SteriPen.  These pens are used to sterilize fresh water in order to make it safe for consumption.  It works by emitting an ultraviolet wavelength in the 250 nm range.  At this wavelength, the UV light breaks down the bacteria’s DNA to keep it from replicating.  The SteriPen shows best results in either one liter to two liters of water.  The pen was placed in each beaker containing the coral and was used to agitate the water for a minute while the UV light was on.  This was done to the two remaining beakers.

Once the corals were exposed to the UV light, another sample of mucus was taken—the same quantity as the first trial.  There was  a total of 9 pre-exposure specimens (three from each coral) and 9 post-exposure specimens (three from each coral).  After gathering the pre- and post-UV radiation specimens, 50 microliters of each specimen was smeared onto an agar plate and left to incubate overnight.

These varied results could be due to a variety of errors in the experiment.  Some of the specimens in the beakers may not have received the same amount of exposure as other corals, not all the beakers were uniform (two were transparent glass beakers and one was an opaque plastic beaker), the bacteria types on the corals may have had differences, some of the corals may have had thicker or more mucous to start with and they did not all come from the same colony.

To remedy these errors for the next experiment, all the corals would need to be in the same type of beaker.  I would prefer all of them to be opaque.  This will allow for maximum UV exposure within the beaker and less UV light escaping through the transparent beakers.  To ensure the corals are the same, the corals will be taken from the same colony to ensure similar DNA is being tested, and it would be good to do many more samples and then specifically look at possible effects on diseased corals rather than healthy ones.
Overall it was an interesting first try to see if there was a potential for UV treatment of bacterial diseases. The coral fragments themselves showed no adverse effects of the treatment immediately after and as well as after several days. Perhaps there will be a follow up on this experiment in the future.