Have You Seen a Goby Before? 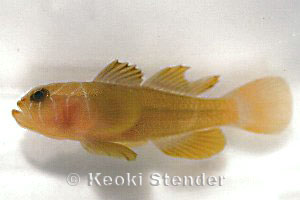 If you have ever gone out to tide pools and sand flats, and seen something dart off quickly, you’ve probably seen a goby.  The goby is a small fish, found both in fresh and salt-water ecosystems all over the world. Although they are small, they make up for it in numbers. These gobies belong to the family Goviidae and this family is the largest of the marine fish. Gobies tend to be bottom dwellers and are rarely seen due to their small stature; few grow larger than 6 inches in length while the smallest have a length of 2.5 inches.  When it comes to choosing a home, the gobies construct their own by using their large mouths to dig burrows and move rocks or live on the reef in crevices and small holes. Even if you can’t see them they are there. 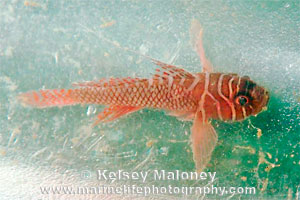 A peculiar species of goby found during an algae lab was the Petite Goby (Priolepis farcimen). This goby is endemic to Hawaii and the Johnston Islands and is the smallest Priolepis genus in Hawai’i. It can be distinguished from the other species by the dark bordered white lines that go across its face and upper body. In a survey called A Survey of the Small Reef Fishes of Kaneohe Bay, Oʻahu, Hawaiian Islands by David W. Greenfield, they looked at the more cryptic fish in the bay and found that the petite goby mostly in deep spur, groove, and shelf sites. But, they are found on open patch reefs, shallow spurs, and groove sites. Even though these fish are masters of not being seen, it does not mean that they are uncommon. You just need to look a bit harder.