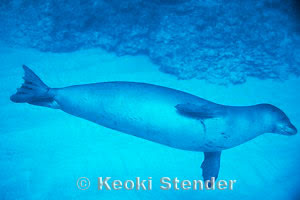 Many folks do not realize that HIMB has a monk seal researcher on island. Dr. Jenny Shultz can be found tucked away in the Miller House (once a residence and now a mini-lab) down the back road from the NSF Lab. Jenny was in the HIMB news recently for work done on Monk Seal Genetics.

As you all know, HIMB uses genetics to look at population structure (or lack there of). The idea being that animals may form local populations that just don't mix very often with others of their kind and, ultimately, they may even gain some unique characteristics. Think about human populations, you can imagine how an isolated group of humans, set aside from the rest of humanity for several generations, might achieve their own set of disease resistances and vulnerabilities. The disease resistances might be invaluable to know. The vulnerabilities might get them wiped out when they encounter the rest of the human race again - possibly before their disease resistances can be studied.

So consider Jenny Schultz and colleagues' study relative to proposals to move monk seals around: "Hawaiian monk seals continue to decline at an alarming rate. However researchers at the National Marine Fisheries Service (Honolulu) have discovered that monk seals survive better in some locations than in others, invoking the possibility of transplantation to enhance species survival. One of the primary dangers of transplantation is that it can disrupt local adaptations, if individuals that are adapted to different conditions are introduced. SOEST post-doctoral researcher Jenny Schultz and colleagues have demonstrated that monk seals move between islands frequently enough to prevent local adaptations. This research demonstrates that transplantation could be a viable option to assist the recovery of Hawaiian monk seals."