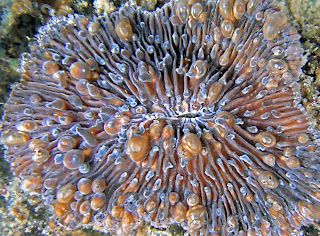 Our mushroom corals have been suffering lately. Not mentally (no brains and all), but they have an issue. They have gas - bubbles (note the bloated tentacles).

Now as a diver I avoid getting bubbles. Gas is not so bad, that is merely an issue for your dive buddies to comment on in the car. But bubbles are another matter.  Bubbles in your blood or brain, or even under your skin are considered a "bad" thing. So divers avoid surfacing too fast to keep from sudden pressure drops on our system, leading to supersaturation, leading us to foam up like a popped open soda.

So how did our corals get bubbles? That is the $1000 question. They have not been diving and they did not go to a Mexican restaurant (maybe).

It could just be a basic issue of super-saturation, too much gas in the water. If animals are bathed in it (as in an aquarium), it may form bubbles in their skin as it comes out of solution. Which can lead to tissue death. Which can lead to animal death.

One way this happens is through injection of air via a leak in the pump line on the suction side. This is pretty common in big aquariums and institutes.


Another possibility is that we have a micro-algae bloom in the bay that is cranking up the oxygen in the water to extremely high levels. Plants release oxygen as they photosynthesize. If you have a plant plankton bloom, they can release so much oxygen into the water that it becomes supersaturated. If your pumps pull this in, you have a problem. 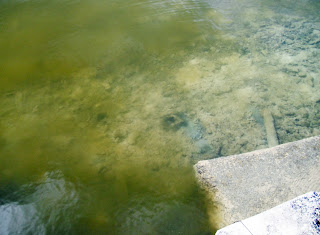 As I walked around the island today, I tested the oxygen levels at several sites. The shark lagoon was running at about 75% oxygen saturation.  The lagoon flat nearby was at 78.5%. Off to one side of the lagoon was a haze in the water, a micro plankton bloom. I dropped the oxygen meter in the bloom. The numbers jumped up dramatically, finally leveling off at about 140% saturation. Now there is some extra gas! Thankfully it was just a small patch and not the inlet water. Water on the sandy beach side was at about 112.2% saturation, which is actually still within normal parameters.

Generally speaking, super-saturation issues can be taken care of simply by creating a fountain somewhere in-line. As the water foams in the air, it also de-gasses back to a normal level. Our touch pool has a fountain-like area underneath to deal with this. And the water this morning was at 104% oxygen saturation, still within normal range. 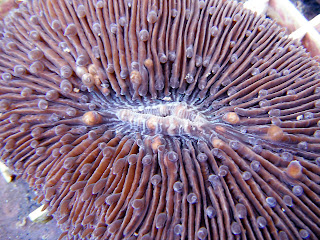 So what is going on? The only thing I really noted was that if I turned down the inlet water, the corals got better. It is something in the water coming in from the bay. If not micro-algae making too much oxygen then???

Maybe we have water that looks clear, but is  nutrified (food particles and dissolved organics) and has a load of bacteria chowing down on it and breathing (back to the Mexican restaurant). You wouldn’t be able to see it, but all of those bacteria breathing would be releasing CO2 and continue to do so in the tank. You would get tissue bubbles regardless of the fountain below.

More tests are needed. This seems to happen every year, so we will keep working on the mystery! Meantime, we will turn down the inlet water on the tank that has the coral shown at the top of the page. Time to reduce its bubbles.